Strength, power and speed are three different (although dependant) physical qualities that must be individually targeted to reach your full athletic potential as a fighter. Supplemental strength and conditioning training is the only way a Thai boxer can hope to exploit this potential.

To explain, let me introduce you to the force-velocity curve. The heavier a load is, the slower you can move it regardless of how much effort you put in. Conversely, you can move a lighter load much quicker, and you’ll move the fastest (maximum velocity) without any external load at all.

The heavier the load, the higher the force your muscles must produce to overcome it. If you plot this force on a graph against the corresponding maximum movement velocity it will form a curve. Before I continue, it’s important to understand the difference between strength and power. Strength is the maximum force that can be exerted, where as power is exerting your force quickly. You use strength to pull your opponent’s head off, and power to knock them out!

Generally, power is more important to a Thai boxer than strength, as we rarely have the luxury of taking as long as we’d like to apply our force. We must strike, throw and defend as quickly as possible. But this doesn’t mean that strength training shouldn’t be part of a Thai boxers training.

Strength (or force production) is actually the foundation of all your athletic abilities. You can’t train to be powerful without first being strong. To accelerate, you must be capable of generating significant force. However, it’s also possible to be strong without being powerful. There’s plenty of bench press monsters who can’t throw a punch – they have no ‘snap’, they simply ‘push’ with great force but very little explosive power. Once you have strength, you must train to apply that force quickly – increase your rate of force development.

It’s crucial to train using exercises that develop all parts of the force-velocity curve – building a continuum from maximal strength at one end, through power onto speed at the other end of the curve. This can be summarised in the following three steps: 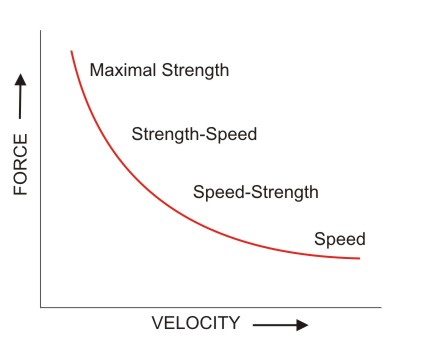 When it comes to power development, the curve is further separated into strength-speed and speed-strength movements – which have a graduated emphasis from heavy loads moved explosively fast to lighter loads accelerated even faster.

Fighters must plan their training to progress through phases, beginning with strength, moving through power onto speed and power-endurance. This way each quality builds a foundation for the next, maximising each subsequent phase.

Practising Thai boxing technique alone will leave you power production potential woefully underdeveloped. The force demands simply aren’t high enough to develop the maximal strength, strength-speed and speed-strength portions of the curve. You can’t significantly change the shape of the curve, and you can’t get appreciably faster without an increase in power and strength. Address these qualities in the gym and bring a whole new dimension to your athletic development and your Muay Thai.

Before I sign-off for today, here’s something else for you to consider. I mentioned earlier that generally, power is more important than strength to a Thai boxer, due to the explosive nature of  striking. This is true, but just as exercises fit on a force/velocity continuum from strength at one end, to speed on the other, Muay Thai technique does too. 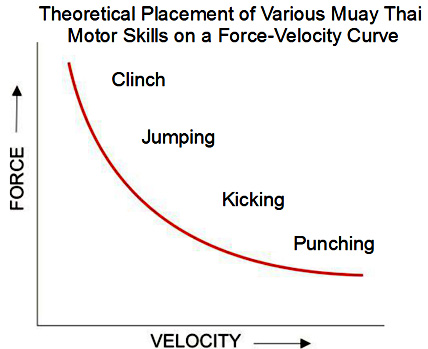 At one end we have high strength technique in the clinch, at the other end high speed technique like punches. And of course we have everything in between too. So if you’re a fighter that likes to clinch and jump around a lot, you’ll need more strength than fighter that prefers to punch and kick. So although all fighters must build sufficient strength to serve as a power and speed foundation, some fighters will employ more strength than others during a fight, depending on their style. As always, train the individual not just the sport…

We use cookies to ensure that we give you the best experience on our website. If you continue to use this site we will assume that you are happy with it.OkRead more