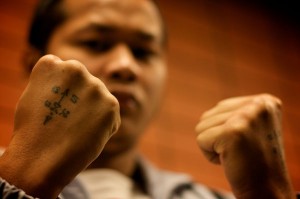 Thailand is a very superstitious country, and this crosses over into all areas of life, none more so than Muay Thai – Thai kickboxing. Thai boxers perform all manner of prefight rituals from sealing the ring (to seal out negative influences and evil spirits from the ring), Wai Kru (to pay respect to their teachers) and Ram Muay (boxers dance). But this is the tip of the iceberg, nak muay or Thai boxers also visit shrines to make offerings to foster good luck, wear magic amulets around their necks and even tattoo magic sak yant symbols on their body’s to make them invulnerable.

This all may seem irrational and far fetched, but when the stakes are high, such as in sports, these pre-performance routines boost confidence and the sense of control for an athlete. If you believe that performing a specific action or behaviour will make you perform better, then you probably will perform better. Sports psychology applies rituals like visualisation and imagery to recreate a particularly successful performance and experience the feelings as though they are happening now.

Sportspeople routinely use rituals to relax and get “in the zone” as part of well-established routines before and during a big game. For example, Tiger Woods always wears red the last day of a golf tournament as it’s his power colour. Chicago Bulls basketball player Michael Jordan wore his University of North Carolina shorts under his uniform in every game. Everything from lucky socks, team prayers, music or pre-game foods can help athletes to gain the confidence they need to give their best. Use whatever tools work for you, it doesn’t matter if they’re rational or not, only that the effect on your mindset and focus is positive.