Strengthen antagonist muscles to get faster? 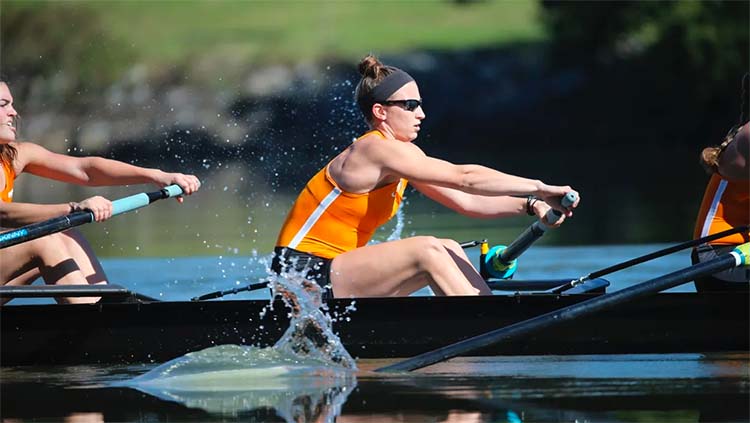 Today at the gym we had a rowing athlete training Olympic lifting. In the rest intervals I took the opportunity to discuss with her the programme prescribed to her by her rowing club. As we chatted, the topic of exercise selection arose. Although rowing is predominantly a lower body movement, the upper-body contribution is extensively a pulling action. However, it’s equally important to train the upper body pushing action too.

Agonist muscles are the ones that move your joints in the desired direction. Antagonist muscles are the ones acting in the opposite direction. So why then should I focus on training the antagonist? Why train push when I want to be good at pull? Quite simply, the antagonist muscles act as the brakes for your desired action. Your body is clever, if you are seriously strong at pulling but relatively weak at pushing (braking) then your body will not let you lay down all your force and power into the pull in case you damage a joint.

An analogy I like is that of a sports car with terrible brakes. It may be capable of accelerating to a high top speed, but with inadequate brakes it will have to go slowly into a corner or it will over shoot the road. Strong brakes would mean braking could be left as late as possible and maximum speed can be applied right up to the corner. If your antagonists are as strong as the agonist muscles then you too will brake late, ensuring maximum speed and power over a full joint range.

The rowing example is the opposite to the usual strength deficiencies. The majority of weight training individuals tend to have an overdeveloped push strength in respect to pull strength. The bench press brigade? Fighters tend to heavily work this horizontal pushing action in the expectation that punch power will be maximised, without understanding the need to balance this strength on the reverse side.

A balanced strength level on both sides of the joint will also reduce the likelihood of injury and improve posture significantly. But I guess in reality most people are more driven by the performance benefit. Make sure you have an equal number of sets and reps in all pulling (rows and chins/pull ups etc) and pushing (bench pressing, overhead pressing) movements in your programme and that you have proportional strength in both directions too. Then you’re going to get the most out your training and your performance.