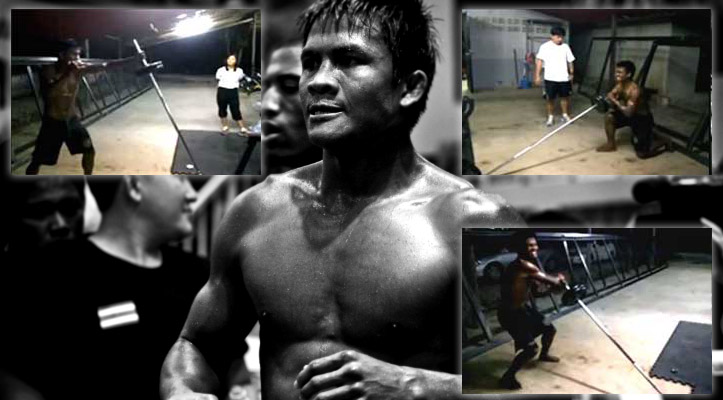 Here’s an interesting video of former Omnoi Stadium champion and two-time K-1 World MAX champion, Buakaw using landmine or coreplate exercises in his strength and conditioning programme prescribed by the Faculty of Sports Science at Kasetsart University. The movements selected are very sport specific, indicating they are toward the end of a meso cycle or block of training, close to a fight.

The landmine twist exercise allows you to work the anti-rotation function of the core in a standing posture. The objective is to produce the largest arc possible with no movement of the core — anti-rotator training. The barbell/landmine configuration also allows enough load to be added to satisfy strength development, not just muscular endurance.

The landmine reverse lunge and knee heavily works strength and power in the base leg. The low lunge position targets the glutes and hamstrings, and the knee strike also places further loading on the glute (backside muscle) of the base leg by squeezing at the top of the movement. The hip flexors lifting the knee only see very light loading. The objective is to move from the lunge to the upright knee strike explosively against the resistance.

The landmine push press develops punching strength and power from the ground up — driving through the legs. The angle of the final arm drive is also much closer to a real punch making it more sport specific. You’ll also notice that Buakaw places his feet in a fighting stance, right foot back when working both the rear arm (cross) and lead arm (jab). Again the objective is to drive explosively against the resistance.