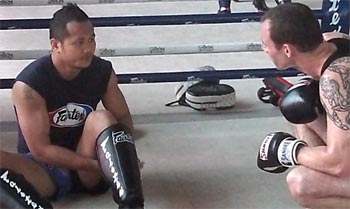 Should you train technique when physically fatigued? It’s a great question, and to grasp the answer it’s crucial you understand how your body learns skilled movement of any kind – get it wrong and doom yourself to hours of corrective practise, get it right and short-cut to reliable skill in adverse conditions.

Before I elaborate on the how your body learns new motor patterns or skilled movement, please understand I’m not just talking about Muay Thai technique, I’m also talking about fundamental movements used in the strength and conditioning gym. If you’re unfamiliar with correct lifting techniques you may not appreciate the degree of skill required to clean and jerk a heavy load overhead compared to throwing a round kick, but after spending some time in the weights room you soon will.

Structure training sessions so that movements demanding the most coordination, skill and/or power are practised early on before fatigue interferes with motor patterning or speed of muscle contraction. New skills, whether lifting in the gym or Muay Thai technique, should be practised immediately after an adequate (but not overly tiring) warm up to ensure movement sequencing is repeated correctly.

“The body does not have the capacity to learn movement patterns when highly stressed/fatigued. This factor is not related to the specificity of training principle associated with overload adaptation in energy systems. The specificity principle of physiological adaptation does not apply to motor learning. To learn skilled movement patterns that are to be executed under fatigued conditions, that learning has to occur in non-fatigued states” — Williams 1979

It’s important to repeat good quality movements or your technique will erode and you’ll perform sloppy movements automatically. Bad habits are very difficult to re-programme. It’s far easier to learn correctly from scratch rather than attempt to alter an undesirable automatic habit. In fact, in the book Motor Learning (1991) Dr Schmidt states that it takes approximately 300-500 repetitions to develop a new motor pattern. Conversely, once bad habits are in place, he states that it’ll take about 3000-5000 repetitions to re-write and correct a bad motor pattern. So concentrate on getting it right and keeping it right and you’ll progress 10-times faster.

Don’t sacrifice form for intensity, it will mess up your technique. Check you ego at the door and focus on quality first. In a previous post I talked about periodised training and using lower intensity sessions to craft technique. As Thai boxers, we tend to struggle to turn down the intensity in favour of flat-out effort, but balancing intensity and quality is very important.

Only perform endurance activities on well practised techniques that you can maintain good form on automatically, even when tired. Just because you seen a Youtube video of a Thai throwing multiple round-kicks, don’t think you necessarily should too. Check their technique, it remains consistent for all the reps. This is were coaches and good training partners can be invaluable, giving constructive feedback regarding the quality of your technique and guarding against excessive repetition with poor form creating bad habits.

It’s common to blast  a ‘finisher’ at the end of pad rounds or the end of training sessions, but coaches should be mindful of the prescribed exercises or Muay Thai techniques used where fatigue-overload is the desired result. Only well-practiced, stable techniques should be used that don’t deteriate significantly under fatigue to avoid reinforcing bad habits. This will vary depending on the training age and physical preparedness of the individual fighters. You must train to test your skill under fatigue, but be careful to avoid tipping the balance and repeating sloppy form — breaking your skill.

JUST CAN’T DO IT

Also be aware that incorrect movements aren’t only caused by fatigue or lack of understanding/concentration, but possibly due to a lack of motor abilities (agility, strength, stability, coordination) or even unfavourable limb lengths etc. Although you can’t do much about your body size and type (morphological constitution), you can certainly boost your motor abilities with appropriate strength and conditioning training. I remember coaching a novice to throw a knee and noticed that despite my constant cueing, he wasn’t coming up on his toes on his base foot. After a quick test, I discovered he lacked sufficient strength to lift his bodyweight using just one calf. After a week of calf-raise strength exercises in the gym, he was able to lift his weight up on his toes with one leg and his knee technique corrected.

Sometimes an alternative method comes along that is more desirable than the way you’ve done it for years. This demands deliberate drilling to re-write a hard-wired autonomous habitual response. Experienced fighters will need to spend considerable time consciously repeating the new movement pattern (thousands of times) until it becomes automatic, replacing the previous habit built over years. This demands returning full circle to the beginner mindset, crafting individual skill.

To progress your skills training at the most rapid rate possible, be prepared to work on maximising your agility, strength and coordination in the weights room and be a stickler for form – for both exercise and Thai boxing technique. Don’t repeat bad movement patterns, keep them clean and avoid thousands of conscious, corrective repetitions. Skills are hard-earned habits, and it’s your habits that emerge under pressure in the ring. Trusting your habits frees up your spontaneous, creative flow and allows you to fight at your best.