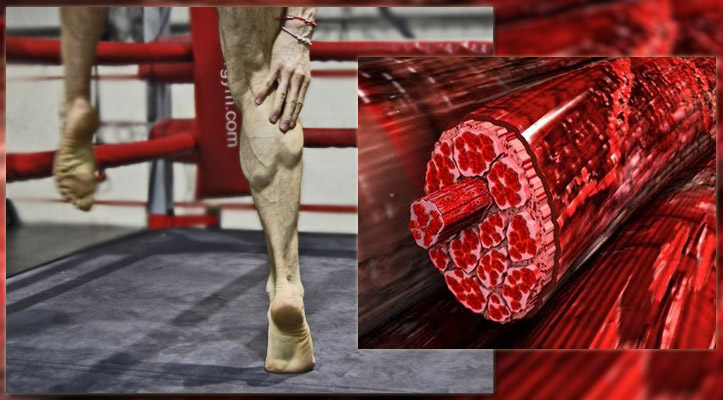 Pulling on my barefoot running shoes, I chose to run the 2 miles to the gym as part of my warm up.

I’m not yet accustomed to the altered calf loading from barefoot running, and as I completed my gym session, my calves began to feel tight — but I still have the run home…

Fast-forward a couple of days and my calves are shot and I’m walking around like I’ve soiled myself!

I’m sure you’ve experienced the pleasures of DOMS or Delayed Onset Muscle Soreness, that usually peaks between 48-72 hours after exercise. You may even crave it, to feel like you’ve had a good workout….

But, is it desirable? Exactly how does it affect your training? How can you prevent it?

Although DOMS is a very common symptom, its underlying mechanisms, and the reason for the delay are not clearly understood (Nosaka 2002)…

We know that muscle soreness occurs as a result of damage caused by doing something that the structures aren’t adapted to.

This could be a significant change in volume and intensity, or performing a new movement through a different range of motion (ROM).

What’s also understood is that  eccentric (lengthening) muscle actions are responsible for soreness, not the concentric (shortening) contractions.

The Effect of DOMS on Training

Following muscle damage, structural system recovery can take up to 3-days to complete, sometimes longer if the damage is severe.

This is a major concern for both coaches and Thai boxers since exercise-induced damage can significantly impair athletic performance, wasting several days of productive training.

In fact, skeletal muscle damage following eccentric exercise has repeatedly shown a significant loss in muscle function — resulting in a loss of static and dynamic muscle force, reduced range of motion, or simply an inability to perform athletically as normal.

It’s been demonstrated that during DOMS, muscle forces can drop by as much as 60% and not always fully restored until 8-10 days after exercise (Clarkson et al 1992).

It ‘s therefore necessary to minimise the amount of structural system damage that occurs, or power and range of motion are adversely affected. This is especially important for a sport like Muay Thai, requiring a great deal of explosive power and flexibility.

However, using a bodybuilding hypertrophy programme or heavy eccentric work will cause muscle damage, making you stiff, sore, and adversely affect your Muay Thai sessions.

It can take days to recover from DOMS, however that doesn’t mean you should just rest. Research has shown that performing a second bout of (even maximal) exercise may be painful, but doesn’t impair the recovery process (Paddon-Jones et al 2000).

This highlights the importance of distinguishing between DOMS and a muscle strain injury.

Although subsequent exercise may not adversely affect your recovery time, it’s widely recognised that it won’t help it either. And the same goes for other therapeutic interventions such as ice, massage and NSAIDS — they may slightly alleviate pain but they won’t affect recovery from structural muscle damage.

If you suddenly double the length of time that you train, distance that you run, or intensity, you’ll  get sore.

If you introduce a new movement or range of motion to your training, this progression must be built again.

I must build the intensity and volume of eccentric muscle actions to avoid blowing out my calves. Try increasing the volume of any new longer duration activity in no greater than 20% increments each week to allow sufficient adaptation.

The only proven method of protecting against DOMS and preventing exercise-induced damage is to perform a prior bout of similar eccentric contractions at a lower intensity. This method is known as repeated bout effect or RBE (Eston et al 1995). According to Nosaka (2001), RBE appears to last for weeks as opposed to days.

However, it’s important to emphasise that the RBE only transfers to subsequent bouts if it’s extremely similar to the initial bout.

Research has also found that an initial bout of eccentric exercise of less than 10% of the volume of the subsequent bout is sufficient to reduce DOMS and promote faster recovery due to RBE, even up to 2-weeks later (Nosaka et al 2001).

Therefore to benefit from the protection of the repeated bout effect, it’s not necessary to perform a high number of eccentric muscle actions. However, as well as number of eccentric actions it’s also important to consider the range of motion to create an effective RBE.

A Few Final Points for Coaches

Coaches should avoid training to develop maximum strength and power if a boxer is experiencing DOMS in affected muscle groups, due to the drop in strength and range of motion.

Caution should also be used when training technique to avoid repeating bad movement patterns and interfering with skilled technique.

Ensure you distinguish between a muscle strain and DOMS before prescribing exercise.

Coaches should utilise the RBE to pre-train specific muscle groups to provide protection from future more severe training regimes. This should also be considered when a fighter returns from a lay off from training.

It’s also recommended that coaches don’t introduce new eccentric loading movement, such as plyometrics, within 14 days of competition to prevent a fighter suffering from muscle damage that will impair their performance.