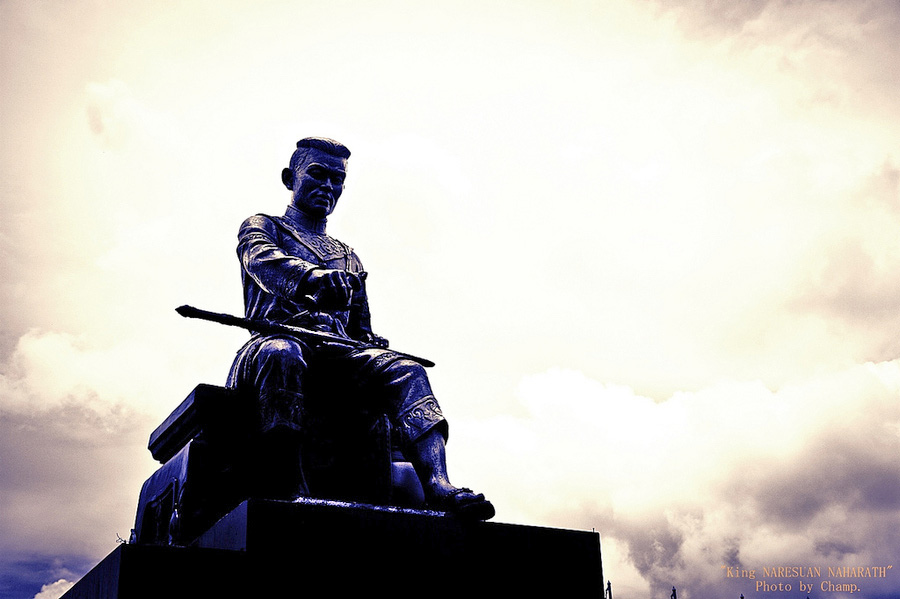 January 25th is the memorial day of King Naresuan the Great, Siam’s (Thailand, as it was known then) national hero and warrior king. It’s thought that on this day in 1592 he defeated the Burmese crown prince, during a legendary elephant duel. In modern-day Thailand, this day is memorialised as Royal Thai Army Day and people gather at many shrines and statues in honour of Naresuan making merit with offerings and chanting prayers.

Although over 12-years ago, I vividly remember visiting the shrine of King Naresuan in Ayutthaya City, Thailand (the old capital of Siam). All around the foot of a large statue of King Naresuan where glass counters full of valuable objects offered to the King. New offerings were also piled high — garlands of flowers, water, ornamental elephants and cockerels, even samurai swords.

I was told that many Thai boxers from Bangkok travel to Naresuan’s Shrine in Ayutthaya to make merit before big fights, bringing them good luck. Their offerings (such as cockerels) symbolise courage and  fighting spirit — cock fighting still continues in Thailand, and the do-or-die spirit of the rooster is revered by fighters.

Fighting cockerels are symbolic of  the battle and warrior kings, but also feature at Naresuan’s shrine as a legendary cock-fight was a crucial event in his early life. The story goes that after Ayutthaya fell to a Burmese army in 1568-69, as young boys, Prince Naresuan and his brother where taken hostage to the Burmese capital while their father was appointed to rule Ayutthaya as a Burmese vassal.

The Value in Merit Making for a Nak Muay

In a previous post, I’ve already touched on the parallels between ritual and superstition, and the mindset and subsequent performance of modern-day athletes — especially Thai boxers. Sports psychology can be the difference between winning or losing to a closely matched opponent.

When making an offering to King Naresuan’s shrine, it’s not really what’s offered that’s important; it’s your intent as you do so. If you make the perfect symbolic offering, but are mentally thinking “That’ll do, get this in front of the shrine and I’ve done my bit”, then you’ll get no benefit. However, if you focus your intent in your consciousness as you make the offering, then you’ve started to develop a powerful mind-over-matter tool.

Enjoy King Naresuan the Great Day, and take the opportunity to show respect the art that you practice and develop yourself beyond the physical. Ultimately, it’s far more valuable.