Why Fighters Should Exercise on One-Leg

In the previous article I posted a video showing a progressive series of unilateral (single limb) leg exercises, and this week I’ll explain why they feature in my Thai boxer’s strength and conditioning programmes. 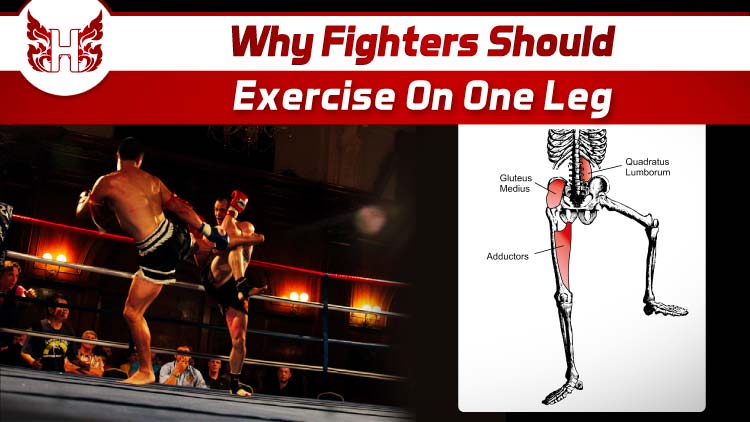 Thai boxers operate on one leg or in staggered stances, placing an unequal load on the legs.

In this respect, the specific training demand for fighters is entirely different to Power-lifting and Olympic lifting athletes – who compete almost entirely bilaterally on both legs (the split-jerk being an exception).

Although bilateral leg exercises do have a place in my programmes, unilateral exercises also feature highly because of the higher degree of specificity for fighters.

I’ve seen many fighters that can squat for reps with a bar loaded with plates equivalent to their bodyweight, yet can’t perform a single pistol squat.

Obviously this isn’t because they lack sufficient strength in knee and hip extension movements – they’re already capable of lifting the equivalent load of their entire bodyweight on one leg.

The problem is lack of strength in the muscles stabilising the body (the pelvis and core in particular), their structure collapses before they can apply all that awesome strength – they’re shooting a cannon stood on sand! Being strong on two legs but pathetic on one leg is a recipe for disaster for a fighter.

Because The Body Is Supposed To Use Diagonal Patterns

Just watch anyone running and notice the opposition of arm and leg. Observe the throwing back of the arm during a round kick. Athletic movement consistently uses diagonal patterning of the musculature, the serape effect. This relates very strongly with single leg training.

Because The Back Is The Weakest Link

Bilateral deadlifts and squats are programmed because they develop (hip dominant and knee dominant) lower body strength. But, if you watch carefully you’ll notice that a failed rep is usually caused by collapse of the spine.

This is not only safer for your back, but we get better training effect in our intended target movement, and that’s a win-win in my book.

Because Research Shows A Bilateral Deficit

Once stabilising musculature is sufficiently strong, research has found that it’s possible to lift more than half of your maximum bilateral lift on just one leg. So there’s plenty of scope to progress.

That summarises why I include unilateral leg exercises in Muay Thai strength and conditioning programmes, but remember as always that progression is key (check out the video if you’d like to see my unilateral knee-dominant exercise progressions).

Don’t be tempted to jump phases, you may have the fundamental lower limb strength but you’ll lack controlled stability – build it patiently. Single-leg exercise aren’t just a party trick, they’re of significant athletic benefit to a Thai boxer. Have fun tapping into something you’ve been missing!