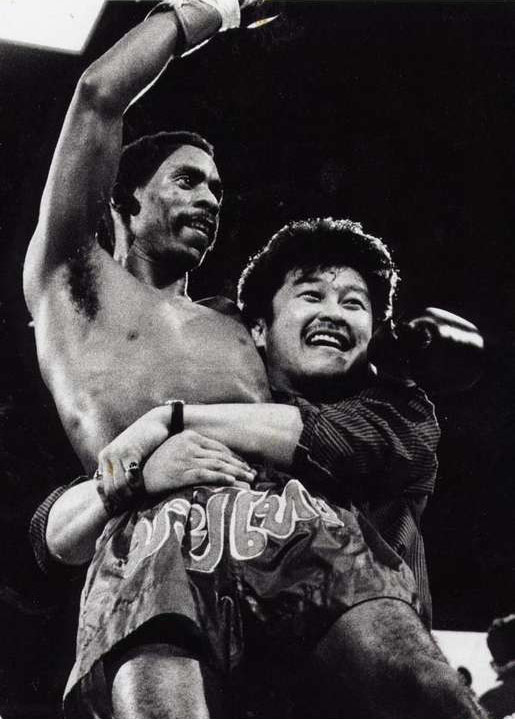 Back in 2007, while competing in the WMF World Amateur Muay Thai Championships in Bangkok, I had the privilege to talk with UK Muay Thai legend, Ronnie Green.

Ronnie spoke of the spirit of MuayThai and the nature of those that fight. He explained how travelling to Thailand and fighting here allows you not only to experience Muay Thai in the ring, but also experience the culture outside the ring – in everyday life.

And here’s the contradiction…

Typically, Thais are very respectful, polite and easy-going (it even reflects badly on you if you raise your voice in an argument), so how can these calm people fight in such a brutal way? And how is it that outside the ring, that those that fight seem the kindest of all?

This is a stark contrast to most combat sports that seem to thrive on angry trash-talk and threats, belittling others in an attempt to elevate themselves.

I recall a documentary in which  Thailand’s Sam-A was reluctantly persuaded by his ambitious promoter to be filmed in a publicity stunt before fighting Kongsak.

Sam-A was filmed throwing his trademark machine-gun multiple round kicks on the pads, before facing the camera and calling Kongsak’s name and threateningly drawing a slicing finger across his throat.

This sort of thing is rare, and Sam-A didn’t want to do it. In fact he refused to let the video be made public — although the promoter still ‘leaked’ it to YouTube.

It shows that Thai culture is becoming more Westernised, but I hope that the historical values can still be preserved in the traditional arts.

The truth is that the objective of Thai culture is to dissolve ego by confronting and ridding yourself of fear.

The fears that Thai boxers must confront are not just the obvious ones of injury or defeat in the ring, but fear of not being good enough, fear of letting others down, fear of looking foolish, among many other personal ‘fears’ or worries.

Living without fear is a personal life’s mission.

If you can free yourself of fear, then you’ll find you can act without ego – thinking of others rather than yourself.

Laura, a friend of mine recently invited me to her Mitra ceremony, the next step in her exploration of Buddhism.

It was a great experience meditating and making merit at the shrine, and I was honoured to have been present at such an important event in Laura’s life.

Following the ceremony, Laura’s friends and family had the opportunity to meet the attending Sangha community members. Having personally only experienced Thailand’s Theravada Buddhism before, it was interesting to observe a more western approach of the same philosophies — and have the opportunity understand more of what was being said… Except for some of the Pali!

During the following meet and greet (with tea and cake) the topic of my practice of Muay Thai obviously came up. And it was interesting that even the Western Buddhists at the Mitra ceremony initially struggled to justify the seemingly needless violence of Muay Thai with Buddhist practice.

So how is it that, even though Thai boxers come from a Buddhist culture, they can be so viscous in the ring?

It’s a journey of self-improvement and testing against others, not about beating others at any cost. By fighting well, you also help you’re opponent grow too.

The best fighters are cool, calm and decisive AND aggressive.

Don’t confuse aggression with anger. Anger is rooted in your ego — thoughts like, “How dare they do that to me”!

By fighting without ego you’ll fight your best – avoiding that predictable red mist of anger.

Aim to win a contest by being the best you can be (positive intent) rather than to undermine and sabotage your opponent (negative intent).

Buddhist philosophy, along with a history of conflict with neighbouring Khmers, Burma and Vietnam have shaped Thailand, and MuayThai…

Tradition, superstition and above all respect permeates Muay Thai, both in the ring and during everyday training. Rituals such as the Wai Kru (paying respect to the teacher) in the ring, and the annual Homage Paying Ceremony, cement the humble attitude of the Nak Muay (Thai Boxer).

This is a long way from the intimidating aggressors that those outside of the Muay Thai community can perceive boxers to be.

True Thai boxers are both the nicest people you’ll meet, and the most ferocious when fighting.

~Panya Kraitus, author of Muay Thai — The Most Distinguished Art of Fighting.

He’s achieved a great amount of success in his fighting career. Yet he’s softly spoken, without ego and has time for everyone.

By his own admission, when those unfamiliar with him learn of his Muay Thai pedigree, they often can’t believe it — commenting that he seems too mild-mannered, friendly and… well, nice!

It’s because of this disposition that he’s had such success. The truth is that Muay Thai won’t turn you into an aggressive thug. In fact, the further you are from that, the closer to real Muay Thai you are.

It’s not what you do, but your intent as you do it. You are fighting an opponent of equal skill and experience so that you can test yourself and grow. And you’re providing your opponent an opportunity to grow too.