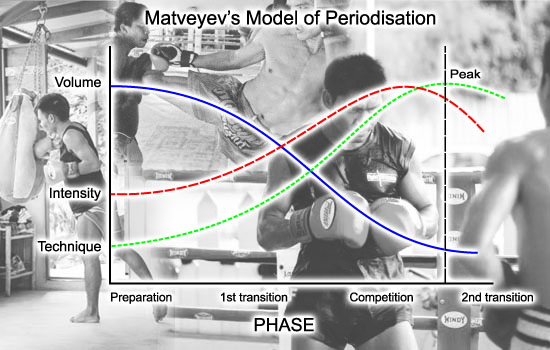 I’ve come across an interesting periodisation model while reviewing a classic article from the NSCA Strength and Conditioning Journal, “A Theoretical Model of Strength Training” by Stone, Bryant et al. And I thought I’d share it with you as it helps Thai boxers picture how their training should be structured approaching a fight.

The article cites Matveyev’s model of periodisation, including a graph showing not only how training volume (sets, reps and duration) and intensity (% of 1 rep max and % of max heart rate) should be phased to peak for an approaching competition (fight), but also the phasing of technical and specialised Muay Thai work.

Furthest from a fight, training volume is high while intensity is relatively low. As the fight approaches, volume reduces while intensity increases. But check out the technique curve, also increasing and peaking for the fight.

These variables also relate to the amount, intensity and specificity of the training, not only in terms of strength, power and endurance, but also Muay Thai training. Thai boxing sessions should be structured toward long term progression and fight goals, to allow for peak technical and tactical performance. The graph shows the amount of technical Muay Thai work increasing as the fight approaches. To be clear, this is not the total amount of Muay Thai training, just the amount of technical work included. Periodisation builds generic, foundation qualities before converting them into specialised, killer performance in the ring.

To give you an idea of the progression I like to use with fighters; further from a fight, technical Muay Thai work will focus on crafting individual techniques efficiently, honing the basics predominantly using bagwork. Progressing toward the fight, more time is spent drilling these techniques in combination to create effective automated patterns with an increasing padwork emphasis. Finally training becomes more specific and personalised — technical and tactical drills focus on sparring work. It’s important to understand this summary explains the emphasis for each phase. For example, I’m not saying no sparring occurs early on, just there’s less of it and it’ll be less tactical in nature. Hopefully you can see how the amount of technical Muay Thai work increases as the fight approaches.

Thinking about how you structure your training leading up to a fight can make a massive difference to how you perform, you don’t want to peak too early! With this article, my intention is to provide some food for thought regarding periodising Muay Thai training as well as your more general strength and conditioning work. They’re both different sides of the same coin —  work them as a team.