Are You Fighting With The Brakes On? 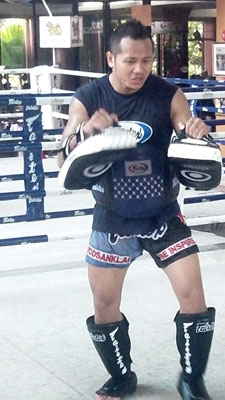 Here in the UK we’ve recently had a heat wave (I’m definitely not complaining, I love it — it’s been more like Bangkok than Bury St Edmunds), and the Muay Thai classes I’ve taught in such conditions have shown that movement economy needed some work. It has been an opportunity to focus on efficiency rather than just blasting the pads under full tension.

This is a lesson I was privileged to learn from the awesome Yodsanklai Fairtex during a private session in sweltering Fairtex Gym, Pattaya. “Relax, relax” Yod said, while effortlessly shuffling in his stance directly before me. His movement was almost mesmerising – relaxed, yet purposeful and ready to strike or defend at the first sign of an advance from me. “Yes, yes.” I replied trying to mimic his movement.

“No, relax. Relax here…” Yod corrected as he slapped my sweat soaked stomach. Although I thought I was relaxing, my body awareness had betrayed me, my core was switched on high-alert (not helped by being stood opposite Yod’s scrutiny). As soon as I relaxed my midsection, boom, energy returned as if by magic.

Explosive, power training — both in the weights room and the Muay Thai gym — should practice this quality. When you get it right, you can feel it; that effortless punch or kick that explodes into the punchbag, the heavy jerk press that just flies up into the air. This is what you should strive for, not just a rate of perceived effort that’s 10-out-of-10 but relaxed, powerful technique.

Such technique comes from efficiently coordinating tension in the agonist muscles responsible for driving movement while simultaneously relaxing the antagonist muscles that oppose the driving movement, acting as brakes. If you don’t relax antagonists you’re trying to accelerate with the brakes left on – it’s much slower and consumes excessive energy. The problem is you probably unaware that you’re doing it, or to what degree.

Training technique gets you there. The better coordinated your movement the more efficiently you produce power and the lower the energy cost. This coordination of movement (technique) is developed both in the Muay Thai gym and in the weights room. Strength and power movements must be practised that coordinate the same muscle groups, the same kinetic chains used in Muay Thai. Using the correct exercises, weights room practice fires the same muscle sequences and trains coordinated agonist tension/antagonist relaxation. These sessions practice coordinated skill under highly loaded conditions, beyond the intensity of Muay Thai practice, and therefore provide benefits you can’t get from Thai boxing practice alone.

As always the key is to strike a balance – in this case the balance of effort and ease.