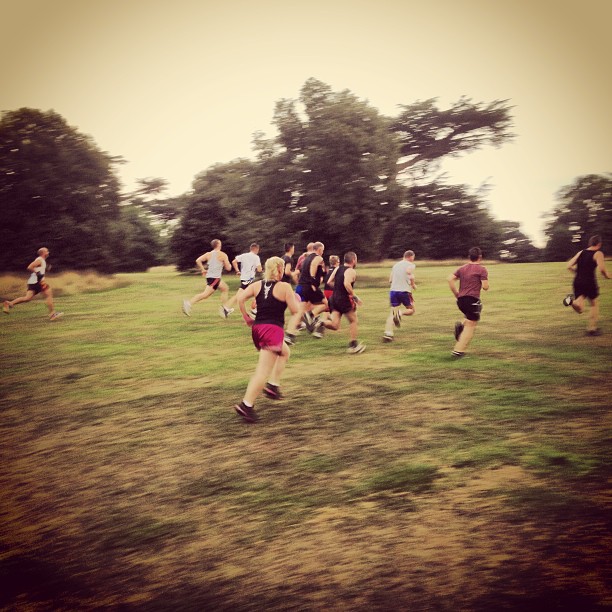 It’s been a hectic week — my full-time gym is in the midst of a major refurb, installing a new mezzanine floor and literally doubling the gym capacity. Exciting times!

Anyway, as the gym is effectively a construction site, it’s not been possible to run the regular Muay Thai classes, so to keep the fighters ticking over, I carried out a training session in one of the local parks. This presented some challenges in terms of available equipment and training surface etc. but also provided an advantage – space to run!

I took the opportunity to work on some energy system development as a team. After a brief warm-up, I lined all of the fighters up, and on my first whistle I instructed them all to run at 70% of max sprint pace until I blew the second whistle 12-seconds later. Then, they had 1-minute to turn and jog slowly back to their start point and bang out 10 push-ups before we go again. We repeated this series of intermittent sprints and push-ups 10-times.

Everyone started out looking fresh and springy, but by rep 3 or 4 the demands on the aerobic system began to tell on everyone’s faces. I challenged them to maintain their running distance for every 12-second burst, not letting it diminish as they found it more difficult to recover.

This drill may appear at first glance to develop purely the anaerobic alactic energy system, but it also heavily taxes the aerobic system. The more repeated sprints you perform, the larger the aerobic component becomes. This is also true of Muay Thai. Building a decent aerobic engine is critical for Muay Thai athletes, it’s the only way you can recharge your depleted energy reserves from bursts of power endurance in the ring.

As well as the energy system training effect I’ve elicited from this drill, I also like the movement pattern cross-over fighters get from running. The diagonal loading though the core musculature as you swing opposite-arm to opposite-leg (serape effect) is actually very sport specific for Thai boxers.

After a brief water break we engaged in some active recovery, working on some technical clinch work before finishing with five rounds of padwork each. The hour flew by, and despite the lack of our usual (awesome :) facilities, we had a very productive training session – much to the amusement of the local dog walkers!