The Science of Muay Thai — Lesson 1 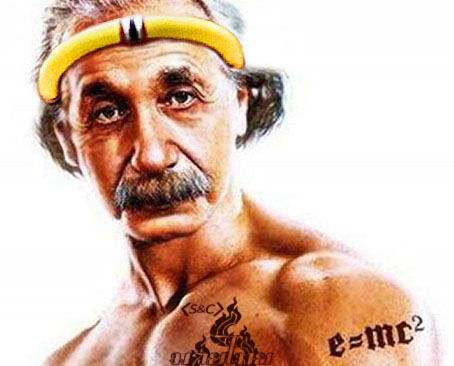 Answering questions arising as a result of my last video, ‘Strength & Power… What’s the difference?‘, it became apparent the root of the answers all stemmed from a better understanding of fight physics!

So at the risk of putting you off with explanations that include reference to stuff you probably didn’t enjoy at school, I’ll briefly outline some basic principles that you’re already using successfully every time you train. With a better understanding of what’s going on ‘under the hood’ you can be more consistent and efficient. Don’t get overly concerned with details, just absorb the principles.

All physical movement must obey the fundamental laws of Newtonian physics, while we are also a biological system converting our food and drink into energy for muscular contraction. We refer to this blend as biomechanics.

In the video I explained the difference between strength and power, and how important it is for Thai boxers to first build a foundation of strength (the ability to generate maximum force) before converting it to power (the ability to exert your force quickly). I also explained that the difference between World Class fighters and the rest, is the speed at which they can move. So you can see that training for speed and power is crucial.

This is what the strength part of strength and conditioning is all about — building the physical quality of force production, and then training to increase the rate of force development, i.e. applying that force explosively fast (knockout power). Better Muay Thai technique transfers this raw power efficiently into your opponent. The more raw power you have and the better your Muay Thai technique, the more effective you are as a Thai boxer. Remember, Muay Thai scoring rewards techniques that demonstrate an effect on your opponent; knocking them off-balance or damaging them. If you become better at generating raw power and better at applying that power for longer (conditioning), you’ll be the best fighting athlete you can be.

Newton’s second law of motion, Force = Mass x Acceleration,  defines the relationship between your speed of movement (Acceleration) and your relative strength (Force) and body weight (Mass). Strength training builds the amount of force you can produce without increasing muscle mass. If an object is subjected to more force without increasing mass, it will accelerate faster. That’s the physics. Biologically this is also true, although you must also train your muscles to contract faster too or they’ll only produce force slowly — too slowly to be effective in Muay Thai striking (again, see the last video).

Looking at Newton’s second law of motion, you could argue that increasing your mass will also increase your force — assuming that you manage to maintain the same speed of movement. This is true, although if you increase body weight without a proportional increase in strength you will slow down. Muay Thai is fought in weight categories meaning that power to weight ratio is key. If you and your opponent are both about the same weight, you’d better be capable of moving faster.

If you’re heavier, you’ll be harder to knock over because you have more inertia. That’s good. However, this same inertia makes it harder for you to get going in the first place. That’s bad. Once you do get your weight in motion you’re difficult to stop — you have momentum. Again, this is good. The heavier you are and the faster you’re moving, the more momentum you have and the more force you’ve produced.

Momentum acting in a straight line can be calculated as Momentum = Mass x Velocity. From this it can be seen that increasing either mass OR velocity increases momentum equally. So why am I so wrapped up in speed?

Although it’s obvious that you’re more likely to land your shots if you’re faster, you must also bear in mind you fight in weight categories — so both you and your opponent are approximately equal in mass anyway. But speed not only differentiates you, it causes more damage.

This is why a bullet does so much damage to it’s target, not because of it’s mass (because it doesn’t weigh much), but because of it’s incredibly high velocity. I’m not saying that you don’t need to apply as much of your mass as possible into your technique, you certainly do. My intention isn’t to detract from the absolute need for efficient Muay Thai technique, but rather to highlight that if you can build your athletic potential with strength and conditioning training to generate explosive (muscular) power without increasing muscle bulk you’ll amplify this technical performance.

If you want to show an effect on your opponent, use both as much body weight as possible in your techniques and hit with as much velocity as possible — this requires a high power-to-weight ratio. To be truly feared in your weight category, you must both train to develop raw strength and power, and practice slick, efficient Muay Thai technique.