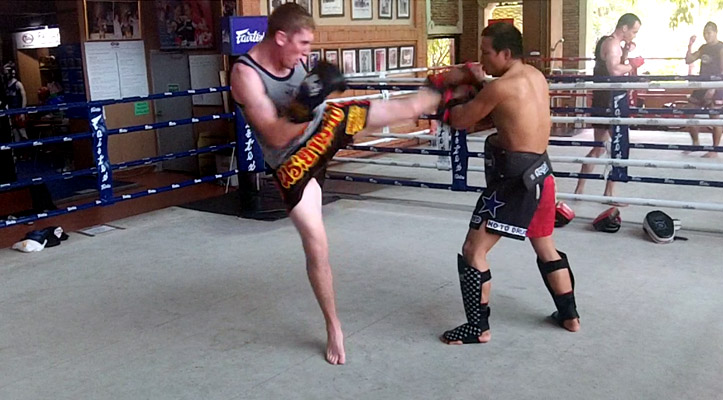 When it comes to physical training, most haven’t heard of the law of accommodation, even fewer have considered it’s application to Muay Thai. But this great question came up on the Questions & Answers Forum. Although I’ve briefly touched on it before, it’s a subject that’s of particular relevance to Muay Thai and warrants a closer look.

Why do you train? To get better! But, to bring about positive changes in your athletic state, you must apply an overload or there’s no biological need for your body to change — it can already cope.

“A training adaptation only takes place if the magnitude of the training load is above the habitual level.” ~Zatsiorski, V.M. & Kraemer, W.J. (2006) Science & Practice of Strength Training. Human Kinetics

Anyone who’s trained at a gym in Thailand knows full well the volume and intensity of training that the fighters there can endure. Most visitors literally hit the ground running, attempting to keep up with the training regime of the resident fighters.

The truth is you can’t. You’re not a full-time fighter that’s progressively built up the same intensity and volume over an extended period of time. It’s also true that you don’t need to train as hard or as long as the resident fighters to improve. Please don’t misunderstand me, I’m not saying you can never be as good as the Thais, far from it. Just that by training more scientifically you’ll progress quicker and to the best of your own genetic capability.

If a fighter uses the same drills or exercises at the same training load for an extended period of time, no further adaptation will take place, they’ll no longer improve and performance will plateau. In fact, if this same regime is used for too long, performance will DECREASE — you’ll detrain despite remaining equally active! This decrease in response to a continued stimulus is called accommodation.

The trick is to train at the MINIMUM threshold required to cause an adaptation. Then you have plenty of scope to vary your training to maintain progress. Don’t go all out with training load and drill/exercise variety prematurely, save them for when you need to bust through a plateau. Plan your training to progressively overload and avoid sticking at an accommodated threshold. Your training should never be a string of random workouts. For many reasons this scatter-gun approach won’t help you reach your true athletic potential.

In part 2 I discuss some specific examples of how to avoid accommodation in your Muay Thai and supporting strength and conditioning training.