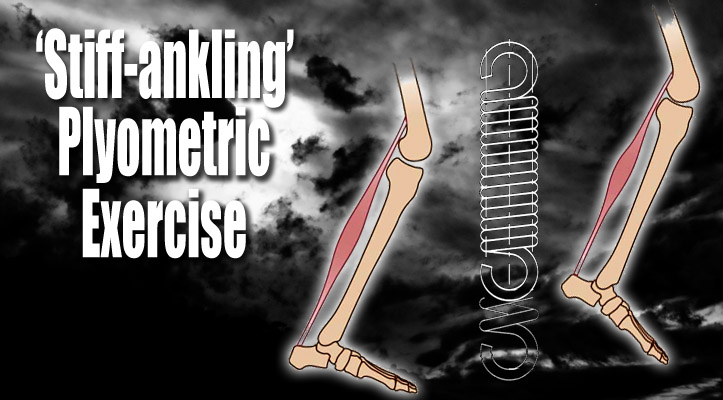 Following the Aerobic Plyometric Routine post, I’ve been asked to elaborate on just what ‘stiff-ankling’ is. So I’ve taken the opportunity to put together a short demonstration video and explained below just how this makes you explosive.

Stiff-ankling is a plyometric drill to develop reactive power primarily in the calves and achilles tendon (the musculotendinous unit in the lower leg). All plyometric training enhances the stretch shortening cycle (SSC) to reuse elastic energy, which maximises your power production and demands less energy too. It’s a win, win. But to use this elastic energy, you must to train to improve your ability to exert power using the SSC.

The SSC is extremely important to Muay Thai fighters, it’s responsible for producing high force at the quickest rate possible. Exactly the rate required to strike with punches, kicks, elbows and knees. But, to successfully utilise the SSC your body has to adapt. It requires your muscles to instantaneously become stiff, transferring force to the elastic tissue (tendon and muscle fascia) which stores and returns the force at an explosive rate. If your muscles cannot become stiffer that the tendons, they will give-out and act like dampers, killing your elastic spring-return — just like trying to bounce on a deflating bouncy-castle!

This training doesn’t just involve strength (although it’s a prerequisite), it requires other neuromuscular adaptations – even strong calves will soften if they’re unaccustomed to suddenly applied load. There’s an interplay between two proprioceptors (sensory receptors that respond to position and movement) that needs recalibration.

Muscle spindles detect when muscles are forcibly lengthened and stimulate contraction to protect the muscle-tendon complex. The same stretch-reflex that jerks your head up after nodding off to sleep. The muscle spindles stiffen the muscle to prevent it lengthening too quickly, and that’s great for reclaiming elastic power.

However, an untrained individual will also have an over-active golgi tendon organ (GTO) that’ll counter the muscle spindles and kill elasticity. The GTO senses the sudden rise in force and protects the muscle-tendon complex by inhibiting (agonist) muscle contraction (and firing antagonist muscles), resulting in loss of muscle stiffness along with any elastic power. Training to maximise this effect requires short bursts of activity (typically less than 10-20 reps) and plenty of recovery (more than 2-mins) between sets. Power training soon becomes power-endurance training (conditioning) if you overdo it — and that’s a different quality — first build power.