It’s Not Your 8-Limbs Striking 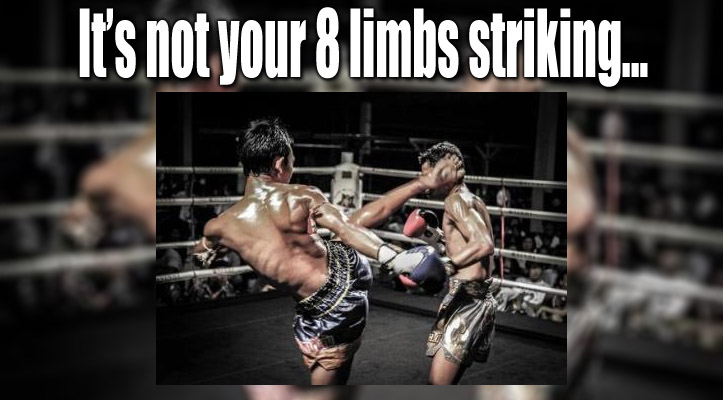 The private Muay Thai sessions I’ve coached recently have handed me a common-thread that I thought I’d share with you. Muay Thai is often referred to as the science of 8-limbs, but being pre-occupied with the striking limbs themselves is a big mistake. This is something I’ve found to be true myself, and can recognise in others too .

When I coach one-to-one, I have the opportunity to focus on an individual’s movement rhythm and timing. Holding pads allows me to gauge the degree of grounding and amount of central body applied to strikes. I can then feedback, “The timing felt off, not enough hip.” or “Yes, that one! That popped” — and the returned nod with a glint in their eye tells me they felt it too.

As soon as the you drive from the floor and then radiate centrally outwards, rather than from the striking limb backwards, power emerges effortlessly. You can focus on relaxed timing rather than ‘grunt’. The problem with defaulting to a max-effort approach is that you’re not efficient. The effort you put in doesn’t equate to power at the target because opposing (antagonist) muscle groups are also firing. Holding pads for others teaches this lesson. The body generates the force, the limb is simply the end-effector, connecting the force to the target. Take another look at the image at the top of this post.

It’s not the foot, or even the leg that’s going to make that kick effective, check out the torque in the whole body.

SHOOTING A CANON FROM SAND

You summon all of your force from the ground. In physical reality we’re all constrained by gravity, and as such it’s the reaction forces with the earth that propel us. Without it there could be no movement. The amount of force and the efficiency of force transfer determines the effectiveness of your movement.

The core is the most important factor in power transfer, if you leak energy here, it doesn’t make it into your strike. Your body must act as a coordinated whole, not a series of disjointed segments. Multiple times during private sessions, the student’s ‘aha’ moment has been the realisation that the focus for all movement comes from the hips and the core musculature.

This is why the Thais invest so much time in footwork, rhythm and movement mechanics. It’s not an instant process, it takes time, patience, a long-term approach. It’s important to have the mindset of enjoying the journey while still having an eye on the long-term goal. We shouldn’t cheapen the foundation by rushing to the end goal. Being overly focused on the grand finale without respecting the process of growing leads to hollow achievement. A facade, the outward appearance of the real deal without ever really getting there. It’s a sports car body-shell with a lawn mower engine.

Outward appearance doesn’t tell you as much as you’d expect. Have you ever held pads for a different training partner only to be shocked by how hard they hit, despite not looking like they can? And conversely, have you been surprised that the flashy, fast training partner doesn’t really connect?

Patient, consistent practice pays dividends – there are no shortcuts, only more direct routes. You need to feel the force transfer to achieve the correct timing and combination of tension and relaxation. How can you learn to feel it? I’ve found what has worked for me personally – and through open feedback from those I train – is not just the Thai boxing practice, but the supporting gym drills or exercises that I’ve applied.

Some of my “go to” gym exercises for coordinating punches correctly are push presses and med ball shot puts. And for kicks, kettlebell swings, Olympic lifts, box jumps and hurdles, tuck jumps etc. are good choices.

Every training opportunity is an opportunity to practice coordinated, skilled movement – including in the weights room. We’re continuously rehearsing patterns of movement and forming habits. Getting stronger, more powerful, or having better endurance are all secondary to moving correctly in a coordinated, efficient manner. I’m continuously building my list of drills and exercises that accelerate learning to FEEL a movement pattern.

It’s great when I’m told, “All this time I thought I had it, but now I realise I was just copying a shape.” And I’m humbled every time I discover this again myself, even for movements I’ve been practising for over 20 years!