Bleed Less – The Steps to Take Before Climbing in the Ring 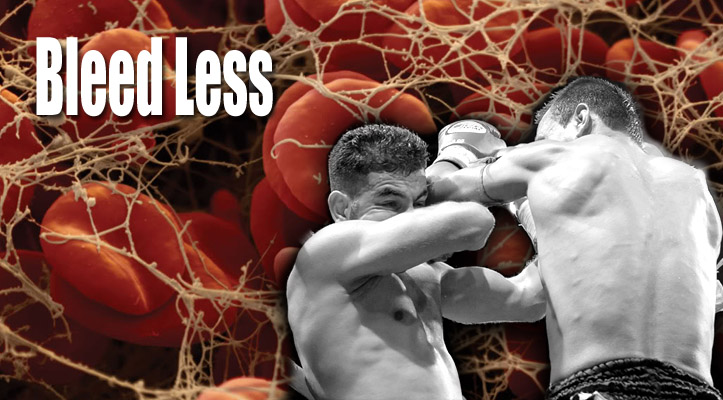 Cuts are part of Muay Thai. A well placed knee or elbow can easily result in a profuse cut that prematurely ends a fight (7, 22). This sort of external bleeding is obvious, but there’s also internal damage; bruising and haemorrhage of various tissues within the body (17, 22) – the most consequential being the brain.

Such bleeds can have a drastic effect during the fight and adversely affect your return to regular full-bore training following the fight. There are genetic disorders that affect your ability to naturally stem bleeding (liver disease, haemophilia etc.) that are largely outside your control, but even healthy fighters can inadvertently consume or apply ingredients that make them susceptible to excessive bleeding (6). A better understanding can help reduce this risk. I’m not scaremongering, just sharing some tips that you might find useful as a Muay Thai boxer or coach.

When that elbow kisses your brow bone, cleaving through the delicate skin tissue, at first there’s a moment where you think you’ve got away with it – perhaps the damage isn’t too deep? Then, initially delayed, the damaged blood vessels begin spilling their contents onto the surface of the skin. The referee pays close attention – will the fight need to be stopped?

Now an internal battle rages as the blood forms clots to block bleeding and then heal the wound. This coagulation is crucial to stop blood loss, invoking cellular activity as blood platelets form a plug at the injury site, while proteins in the blood plasma kick off a chemical reaction with vitamin K and calcium, forming fibrin strands to reinforce the platelet plug with a mesh. A skilful corner team can make a big difference in stemming blood flow between rounds, but you can also affect to the outcome – if you’ve planned ahead.

Why Am I Bleeding More Than Normal?

“Blood thinners” are ingredients that lengthen the time it takes for blood to clot. There are two main types of blood thinners. Anticoagulants hamper the chemical process forming the fibrin mesh, while Antiplatelets prevent blood cells (platelets) clumping together to form a clot. NSAIDs (Non Steriodal Anti-inflammatory Drugs) such as aspirin, ibuprofen and warfarin are often prescribed by doctors to prevent clotting in patients with blood clots in their legs or heart.

It goes without saying that such medications have no place in a fighter’s regime. Coaches should be aware that fighters are highly likely to self administer such nonprescription pain killers without your knowledge, and exceeding the recommended dosage is also common (3, 9).

There are also a number of foods and supplements that negatively affect blood coagulation, containing high amounts of aspirin-like substances called salicylates, omega-3 fatty acids , vitamin E or with natural antibiotic properties (8, 16, 20). Everyone has a different level of sensitivity to these, but it makes sense to avoid consuming or applying excessive quantities of Anticoagulant or Antiplatelet substances (either individually or in combination) a week or two before a fight.

These Can Make You a Bleeder

Alcohol in general has been shown to negatively affect blood coagulation (13), but I know you’ve already forgone alcohol in preparation for your fight, haven’t you? Studies have also shown that fish oil and omega-3 increase blood clotting time (8, 16). So drop the fish oil supplement in the final week and avoid omega-3 rich fish like anchovies, salmon, tuna, mackerel, trout and herring.

It’s not just what you consume that affects how quickly your blood can clot. Vitamin E also slows coagulation, and affects blood clotting even when applied to the skin via creams and lotions – so check the ingredients on the labels. Sensitive individuals have even died from an overdose of over-the-counter sports medicines containing methyl salicylate, which if rubbed onto the skin at high enough doses can act as an anti-clotting agent and may result in serious health related issues (1, 14, 21).

This is where Thai boxers should take note. Namman Muay Thai boxing liniment contains 31% methyl salicylate, and I know we apply that stuff liberally before a fight (4 ,5). It’s recommended not to exceed 40% coverage of the body with a methyl salicylate topical cream or lotion, and to be aware of other medication that may interact negatively, such as NSAIDs (1).

Just be aware of the combination of all the elements within your control that can affect the rate of blood clotting, and try to minimise the combined affect. Coaches should try to ensure they know what fighters have self-administered to avoid negative combinations. Also be aware that female fighters are more likely to use nonpescription pain killers than male fighters (3).

Research shows that dehydration also increases the risk of skin tears ( 11, 18, 19). There are many reasons why fighting dehydrated is a bad idea, from both a performance and health perspective, but also bear in mind that you’ll cut easier too.

Dave Croft, owner and founder of Bradford Thai Boxing has said, “I’ve found that fighters who depleted (water) prior to a fight are more susceptible to cuts/tears than those who did not.” With dehydration of various levels being employed by fighters making weight, it’s vital that complete rehydration is achieved before stepping into the ring.

Vitamin K plays a major role in blood clotting, and is used to reverse the effects of blood-thinning medications (10, 15). Vitamin K is found in leafy green vegetables, broccoli and brussels sprouts, kale, spinach, lettuce, asparagus, celery, leeks, cauliflower and cucumbers. Calcium is also important in forming a blood clot (2, 12). Eggs and dairy products such as milk, cheese and yoghurt are rich sources of calcium and can help reduce bleeding. Both Calcium and vitamin K must be present in the blood to support the coagulation process, if you lack either of these nutrients then clotting will take longer than normal.

Muay Thai is a full-contact activity that routinely results in both external and internal bleeding of various degrees, and exposure to blood-thinning substances should be minimised. Fighters that bruise readily in training, or suffer regular nose bleeds would also benefit from the advice in this article.

With the exception of anti-inflammatory medicines, all the other factors discussed in this article slowly affect the body’s coagulation/anti-coagulation balance over a period of time – weeks rather than days. So don’t panic, just be aware of how you my inadvertently build up and combine these various elements in the week or two before the fight.

At the vary least, coaches should educate fighters regarding rehydration and which NSAIDs to avoid, remain vigilant to self administered nonprescription medicines and be careful of the amount of Namman Muay Thai liniment applied to each fighter. With a better understanding, you can better influence your rate of bleeding before you even step in the ring.

19. Sussman G, Golding M. Skin tears: should the emphasis be only their management? Wound Practice and Research, Volume 19 Number 2, 67, June 2011