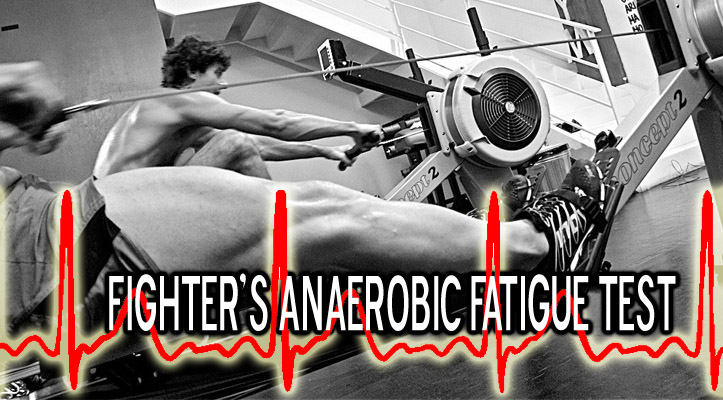 Here’s a simple, but highly effective test you can conduct on a rowing machine to determine your maximum average power, anaerobic fatigue and anaerobic capacity – a very useful gauge for Thai boxers.

The result of this modified Wingate rowing test can not only be used to track your personal fitness progress and the effectiveness of your training programme, but also provides feedback as to how you compare to others, and if you need to improve either your power production and/or anaerobic fatigue resistance.

Quite simply, the test involves rowing on a machine as hard as you can for 30-seconds, recording what your average power was over that interval (Watts) while resting for 30-seconds, then repeating this again a total of 8 times.

It sounds easy, but believe me it’s tough! It’s important that you go flat out every interval – I expect to hear swear words under your breath during the rest intervals!

So set yourself up with a stopwatch and a pen and paper, and if possible, a training partner to record the results for you. Alternatively, record the rower display with a video camera/phone and play it back to get your results.

Make sure you zero the power reading on the rower display before each interval begins, and let the rower flywheel completely stop between intervals too – you need to begin from a standing start each time.

And make sure you record the average power during each 30-second effort. If you record the peak power, you are only counting the strongest of your first few pulls, before fatigue kicks in. We want ALL of your work output for the full 30-seconds to count, not just when you were better rested at the beginning of the interval!

Sum up the total power averages of all the intervals… this total is your anaerobic capacity.

For reference, I want fighters to fatigue by no more than 25% using this measure.

Below you’ll find a test table to record your results.

A quick side note regarding the fan/air damped rower’s damping level during this test; this setting isn’t the resistance level, rather the rate at which the flywheel slows after you stop pulling. The resistance depends on how hard you pull — the harder you pull, the more it resists — and all comes out in the power calculation.

The damping level should match your rowing rate, as either too high or too low will mean you can’t express full power – think jumping onto a treadmill that’s already running (either too fast of too slow). Experiment to see what works best for you, but most people get the best result at about 5 or 6 out of 10.

Once your rowing technique stabilises, this test is a great way to directly measure power endurance (anaerobic lactic system). If you need some pointers on rowing technique, take a quick look at the following video.

I like using the rower with fighters, as it’s a measurable method that demands coordination of both lower and upper body in a power endurance activity. Not a bad representation of the energy system demands of Muay Thai.

The Wingate Row is one of a battery of tests I use to measure the performance profile of fighters that I work with, and you’ll find performance testing in the both the  Muay Thai Accelerator and Heavy Hitters programs.

Testing a fighter’s performance profile every 3-months or so will both help you target training toward your gaps in performance, and show if your training program is working!