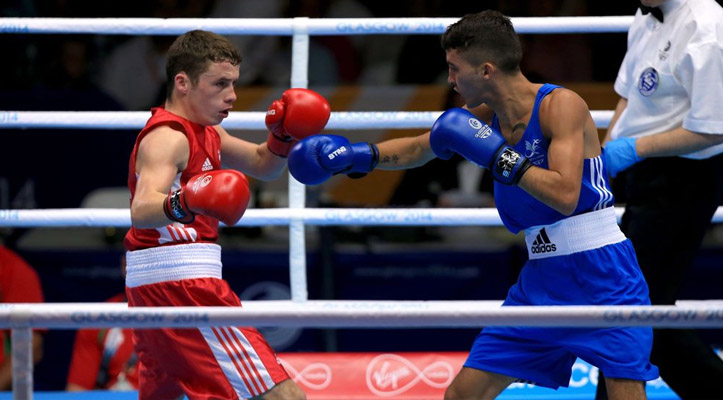 Sitting watching the 2014 Commonwealth Games, I was struck by the coaches activity — grabbing fleeting moments to refocus their athletes.

The boxing corner-teams were especially interesting…

Although understanding how to coach effectively during competition is crucial, it’s critically important throughout training too. Coach Nick Grantham uses a great analogy that I’d like to share with you.

Your fridge constantly hums in the background, but you don’t notice it anymore — you’ve tuned it out of your hearing.

Some coaches are like that, constantly babbling on, spewing out information and overloading their athletes.

I see it all the time in fighter’s corners between rounds and this doesn’t help – ever!

Even in training sessions, I’m sure you’ve come across trainers that drone on and on at fighters, often to make themselves feel knowledgeable than to help the individual.

Good coaches don’t speak too much, and when they do, it’s just pertinent information (that’ll have the greatest impact right then in that moment).

I’ve found this be true both as a fighter myself, and while coaching and cornering fighters too.

It’s the 80-20 rule again – impart only the critical 20% of information that’ll result in 80% of the effect, not the other way around.

Nick Grantham sums this up with another great analogy — we must ‘tweet’ our information in 140 characters or less.

Keep it succinct or lose the effect. If you speak less, but the quality of your information is gold, when you say something your fighter listens.

Of course this is important in training, but it’s absolutely vital at ringside.

Too much information sends the fighter into a cognitive state (paralysis through analysis), slowing their reactions and destroying their flowstate.

You must facilitate your fighter’s style rather than inhibit it, or even worse, force your own style on them.

There’s nothing more frustrating as a coach or corner-man than trying to efficiently bullet point key objectives with a fighter, only to be sabotaged by a well-meaning expert who fills your purposely punctuated ‘sinking-in’ pauses with clutter.

Bear in mind that most people only recall around 20% of what you say to them, especially in high stress situations, so don’t waste the opportunity.

Open with the most crucial information, 2 or 3 things at most, let that soak in for effect and then repeat in conclusion. That’s it.

As always, it’s quality rather than quantity.

Don’t be tempted to ‘over season the dish’ – what would have tasted sublime will end up tasting like crap!

As a fighter, if your coach is a babbler, just focus on the first few things mentioned (that should be the most important detail) and try to ‘tune-out’ the rest of the filler.

As coaches, we must remember to keep it succinct and simply do what’s best for the fighter in the moment. Don’t be tempted to fill time with extra information… instead repeat and recap.

Even ask your fighter to repeat back to you what the 2 or 3 objectives are for the next round – especially if you feel they’ve become distracted!

Do This Every Session To Get Better at Muay Thai Quicker

The 3 Biggest Mistakes I’ve Made