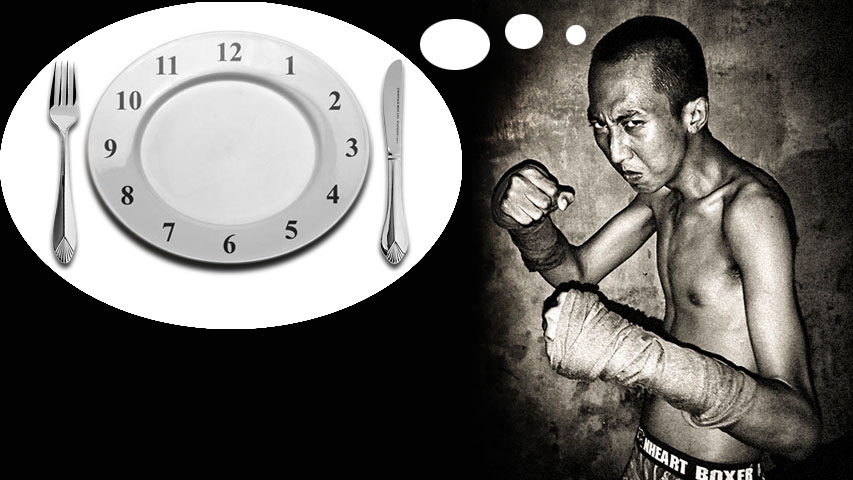 I’m sure you’ve experienced this before – you’re expecting to fight on a show at around 6pm, but the event organisation has gone awry. It’s 9pm already, and you’re STILL waiting for your slot in the fight schedule. You’ve planned and prepared your food and snacks to maintain energy levels, and that has now all gone out of the window too.

Do you eat, drink or just wait until afterwards? Will you lack energy in the ring? If you eat now, will you be sluggish, or even feel queasy? Prompted by a reader’s question following my Muay Thai & Carbs Report, I’m going to share my tips for coping with fight schedule delays.

A 5-round A-class Muay Thai fight is a maximum 15-minutes of vigorous activity. It’s important you keep this in perspective. There’s enough stored carbohydrate (glycogen) in your muscles for at least an hour of very HIGH intensity exercise, or MANY hours of low intensity activity.

Aside from your warm up (which should be as energy sparing as possible anyway), the rest of your pre-fight activity will be physically restful. You won’t need much in the way of fuel for such a short duration competitive event – you’re not carbo loading for a marathon.

Try not to eat within an hour before the fight, as this can sit heavy in your stomach. Digesting food diverts blood to the stomach to extract and transport nutrients. Whereas physical activity shunts blood to the muscles and away from the stomach, so food will just sit there and rot! Not great if you’re fighting. It’s also worth mentioning that eating too much protein or fibre at this stage will slow your digestion considerably, making that food sit heavy in the stomach too.

If I feel I must eat something, I’ll graze light snacks, eating something I know I could eat before training without negative effect. My preference however would be a milk drink, that always works well for me.

I’ve had my fair share of late fights in shows, and in my experience, every time I’ve felt hunger-pangs while warming up just before a fight, I’ve gone on to fight well. I’ve not felt lacking in energy, to the contrary, I’ve felt unencumbered, light, and with a ‘bulletproof’ resilient midsection. In fact, now whenever hunger-pangs come on just before I fight, my inner voice says, “good, I’m ready.”

For years now, I’ve also periodically trained using phases of intermittent fasting to manage body composition, and this has further allowed me to test how I feel and perform while training “hungry”. This has taught me that hunger is largely a psychological habit that can be controlled. Despite what the sports nutrition companies tell you, you’re body isn’t about to fall apart just because you feel a bit hungry.

The psychological aspect of your fight day is by far the most important factor affecting a win or loss on that day. Doubting your ability or allowing excuses to creep in is doing your opponent’s job for them. Always remember that any delay to your scheduled fight time equally affects your opponent too, so the detrimental effect cancels out. In fact, I see it as an advantage, because I believe I can handle the situation better than my opponent. Don’t be afraid to fight hungry.

And there’s more to carbohydrates than just fight day energy levels. Check out some of the resources below!