MUAY THAI MINDSET – WHO ARE YOU COMPETING AGAINST? 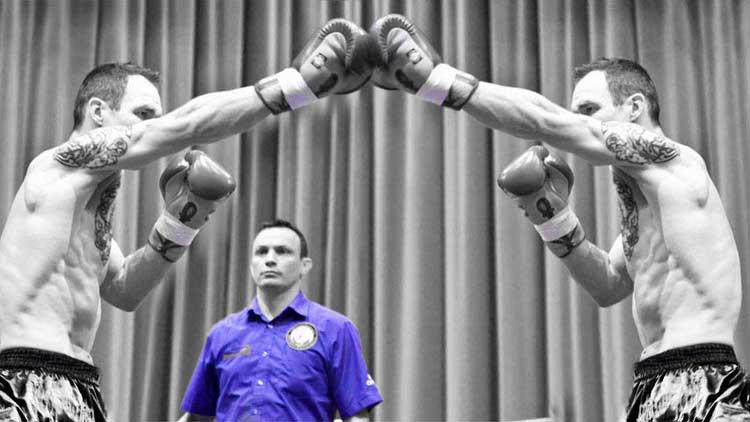 I’m sure you’ve heard it before, that about 90% of fight winners can be predicted by their mindset before the fight. What mindset does it take to be successful in Muay Thai (and in fact life)? I’m going to give you an insight in this post, and to get a true sense of it, I’m going to relate some personal stories.

I’ve been training my 67-year-old Dad in the gym for sometime now following his back surgery. The focus has been rebuilding his strength after a period of disuse, and teaching his body to move correctly to avoid the habits that led to his lower back injury.

Working with my Dad as a client has been enlightening. His mindset and approach to training is very similar to mine. He has all the drive needed to be successful, but needs this focusing in the right direction, or overuse injuries will occur.

I recognise his motivational traits because they are the same as mine (I may well have been subconsciously programmed), and it’s different to the majority of the competitive people I’ve had experience of. But those that have had long-term success seem to share this outlook.

I was lucky that my natural mindset combined with my work ethic was aligned to success in the ring. But nobody showed me how. In my early fights, I’ve often referred to myself as a crash test dummy – I didn’t have a coach, and had to learn what did or didn’t work the hard way, and I had to learn fast.

Muay Thai and all it’s associated training has allowed me to grow as an individual, and I love being able to give people the shortcuts that I’ve discovered along the way. Through research, I’ve since learned why my mindset is successful, and improved it, and I’ve begun to teach it to others who aren’t so naturally inclined – and it works.

It boils down to two extremely powerful motivational drives, both can appear successful, but only one is robust enough for long-term success. I believe either of these two drives are to a large degree inherent in your character, but can also be affected with conscious effort. It comes down to what you see as being successful.

I’ve observed fighters are either motivated to do their absolute best, OR to beat their opponent. Both of these motivations are to win, and depending on your outlook, you may not see a lot of difference — but the difference is massive.

For a fighter that’s motivated to be their best, they are in control over this outcome. If they’ve trained hard, put in the correct preparation, they’ll achieve this win OR lose. This is intrinsic motivation, and is the best way to go about things.

A fighter that purely wants to beat their opponent (usually by any mean necessary) is not in control of that outcome. The other opponent (who may be better on the day), the judges, the referee, even your corner team play a big part in this outcome. This is extrinsic motivation, and leads to a lot of suffering.

Intrinsic motivation essentially means you’re competing against yourself, not the opponent in the ring. Your opponent is simply the test put in front of you. When you sit an exam, you don’t try and ‘beat’ the test, you simply take on the test and do your best. You’ll either pass or fail depending on how hard the test was, or how much preparation you were prepared to put in.

You should alway be fighting at a relative level – in a weight category, number of fights experience, A, B or C-class rules etc. So the test should be appropriate for you, or it’s not going to help you grow. Growth is a key factor for an intrinsically motivated fighter.

After every fight, I’d make a ‘shopping list’ of what went well and what didn’t. The stuff that I needed to work on was more important to me than the things that went well. I acknowledge what’s working, and praise myself for that, but then focus on what I need to work on between now and my next fight.

I’ll be even better next time, but will my next test (opponent) be a good test or not? Who knows, but I’m going to enjoy finding out. Being motivated to do your absolute best means you aren’t phased easily in a fight. If you get knocked down, you get back up and are more determined – you fight with heart, rising to the challenge.

Wanting to win is no doubt a powerful influence, and it’s great when you’re winning. But you won’t win all the time (if you are, the test isn’t hard enough), and what happens to your motivation then?

I’ve seen many promising fighters start with great gusto, performing fantastically well in the gym, sparring, or in earlier fights against lesser opponents, only to come unstuck when they’ve been truly tested. Training becomes a chore, and eventually they fall by the wayside despite natural talent.

The problem is an extrinsic mindset. If you judge success by things that are outside of your control (beating your opponent, winning the title, what others think of you) then you’re setting yourself up for a fall. It may not come straight away, but it will come.

I see it in ‘real time’ in the ring too, a talented (extrinsic) fighter is doing well, then their opponent manages to unbalance them sending them to the canvas. They get back up, feeling humiliated in front of the crowd and immediately start a process of negative self talk and lose heart, eventually messing up the rest of the fight from that point.

That’s an example of how extrinsic motivation can hinder you in the immediate short-term, but it’s even more destructive over the longer term.

HOW TO BE INTRINSICALLY MOTIVATED

You can’t always control who your opponent is, how they’ll fight that day, what the judges see, how the referee controls the action etc, etc. So don’t sweat it.

You train to be the best, that is the best YOU can be, it’s nothing to do with anyone else. Compete against yourself – everyone else is an opportunity to test, and then learn and grow. Recognise the opportunities to grow in every situation, including failure.

Failure simply means your testing at the right grade! Don’t be afraid to fail, just make sure you’re learning from it. Make your ‘shopping list’ and then get crafting between now and your next fight (test).

In closing, back to my Dad. Talking about motivation after one of his training sessions, my Dad said to me, “You may think this is daft, but I time myself making my breakfast in the morning! I try to make it as fast as possible, doing things in a priority order as if I’m up against the clock.”

I laughed! Because I do exactly the same thing! This is an example of intrinsic motivation, not trying to beat anyone other than yourself. The truth is, if you think like this you can’t lose. You can only get better, and it’s up to everyone else to keep up.