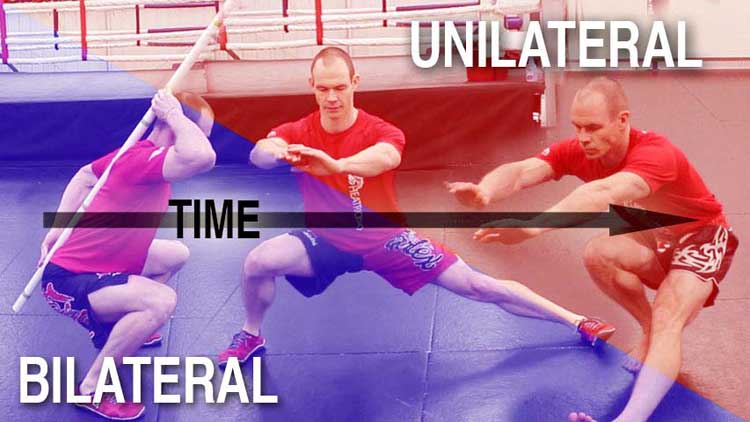 I’ve had a lot of questions regarding how best to introduce single leg exercises into strength training sessions, so I thought I’d share with you an overview of my approach to incorporating single leg training for athletes in my Muay Thai strength programmes.

In later, more Muay Thai specific training blocks, I use single leg exercises as my main lower body lifts, rather than in addition to the standard bilateral (two-legged) lifts such as squats and deadlifts. In this way, the focus shifts to unilateral (single-leg) exercise as the fight approaches, but that’s not the first time my fighters experience single leg training.

Although I plan the bulk of the single leg exercises toward the end of the training phase (closer to a main fight) due to the increased Muay Thai specificity, I also include unilateral movements all the way through the programme – even in the initial Preparation Block training! More about the Prep Block coming very soon.

I also include single leg exercises in warm up sequences, plyometric routines and metabolic finishers, so the fighter is always accustomed to stabilising single leg lifting patterns. Then when these lifts become the focus of the training load, the fighter can coordinate, balance and productively build strength in these movements. If you’re not used to them and suddenly chuck them into your programme, they aren’t unlikely to be very productive, and you’re likely to make the fighter very sore (DOMs), and even injure them.

I’ve gone into more detail and given a video in my post Single Leg Exercise Progressions.

Pay particular attention to avoid inward valgus collapse of the knee when using single leg exercises. This reinforces weak, bad habits and will lead to injury. I’ve written a post for Muay Thai Scholar that discusses this a little further – How Does Your Body Fail? – Strength and Conditioning for Muay Thai.

Just Reminding You Why

If you’re interested to learn more about why I think single leg exercises are crucial for Muay Thai fighters, have a look at my post Why Fighters Should Exercise on One Leg.

My approach to programming single leg training is the same as my general approach to Muay Thai periodisation, that of the conjugate model – where all qualities are trained in each block, but the volume/intensity emphasis shifts depending on the particular block in the training phase.
My video post regarding my choice of periodisation model for Muay Thai programming is a useful adjunct at this point if you’d like to delve a little deeper.

One of the keys to effective strength and conditioning programmes is progression, and single leg training is no exception. Don’t suddenly chuck single leg training into your programme – at best you’ll be too sore to train Muay Thai skills properly, and at worst you’ll become injured. Nurture this athletic quality, build it and you’ll reduce your likelihood of injury and certainly see and feel the difference in the ring – where it counts!