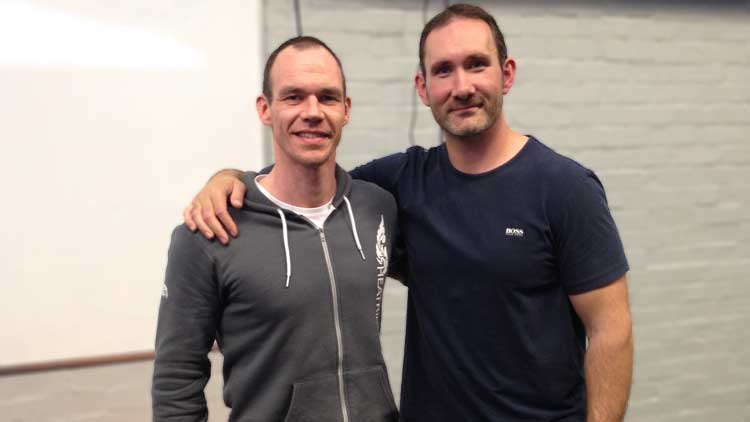 Over the Bank Holiday weekend I was privileged to spend 2-days with Joel Jamieson of 8weeksout.com, widely recognised as one of the foremost experts on strength and conditioning for combat sports, and someone that has heavily influenced my personal approach to athletic training and energy systems conditioning in particular.

This was his first time in the UK, and my first opportunity to meet the author of Ultimate MMA Conditioning and speak to him in person. It was great to have Joel present his methods, and above all, have the opportunity to ask questions to clarify practical understanding of the extensive theory he presents.

Joel’s approach has always been far more holistic than the vast majority strength and conditioning coaches, incorporating all aspects affecting physical performance. And his 2-day Conditioning Coach Certification expanded not only on the principles outlined in his best selling book, Ultimate MMA Conditioning, but also his Bioforce HRV PRO training certification material, and his Conditioning Blueprint DVD.

But in addition to this, Joel also shared his latest areas of research, adding more emphasis to the roles of the brain and the training environment in athletic performance, which are considered in combination with the body to form a conditioning model. All three are actually codependent and inseparable. The physical body is usually the focus for strength and conditioning training, but taking the time to explain the importance of the brain and training environment’s contribution I found refreshing.

The role of the brain and mindset has always been a project of interest for me, as I’ve experienced the pros and cons of effective mental conditioning both in my own fight career and in those that I’ve coached. Having Joel cast a spotlight onto this area too, sparked my curiosity considerably. And the way he tied in the training environment into this same equation made complete sense, and something I must admit I’d missed the importance of.

The Brain As A Prediction Engine

Skilled fighters seem to react faster than unskilled ones, and although reaction speed is important, it’s not the whole story. The major reason skilled fighters react so seemingly fast, is they’re actually better at anticipating what’s coming. The brain is acting as a prediction engine, based on the cues it’s receiving from the five senses. The greater the quantity of relevant experience you feed your brain, the better it can accurately predict what’s going to happen and begin reacting before it happens.

And these reactions are unconscious, not requiring thought, and that’s why they’re fast enough to be effective in Muay Thai. Something I refer to as flowstate. And the closer your training environment is to the competitive environment, the less disrupted your unconscious flow. As soon as you start consciously deliberating, you’ll slow down.

Unconsciously, your brain triggers your autonomic nervous system based on its perception of the external environment, rather than what the external environment actually is. This is why all life stressors (bad sleep, travel, money worries, a hot, humid climate etc.) tax your central energy reserves in the same way as physical exertion and take away from your ability to recover from your training, contributing to overtraining and slower progress.

There’s lots more to this, which I’ve eluded to it in past articles but will flesh it out in a little more detail in future posts — as I try and keep these blog articles to bite size pieces that are easily picked up.

The brain’s role in motivation is also crucial. Your conditioning can be measured as the maximum amount of power you can apply for a given time. This is determined by the specific development of your body in relation to its environment, and your conscious and subconscious motivation to perform. Even an ideally conditioned body won’t perform if the motivation isn’t there. And as with everything, it’s about habits. Set good habits in training and you’ll repeat them in competition.

If your training environment is too dissimilar to your competitive environment then your crafted habits will become broken – your brain’s predictions will contain too many errors. Enter the role of simulation and visualisation. Both your subconscious and conscious brain is trainable. Feed it the right stimulus, maintain quality of movement above all else (even when fatigued), and you’ll perform better, simple as that.