Lack of Strength and Conditioning in Thailand? 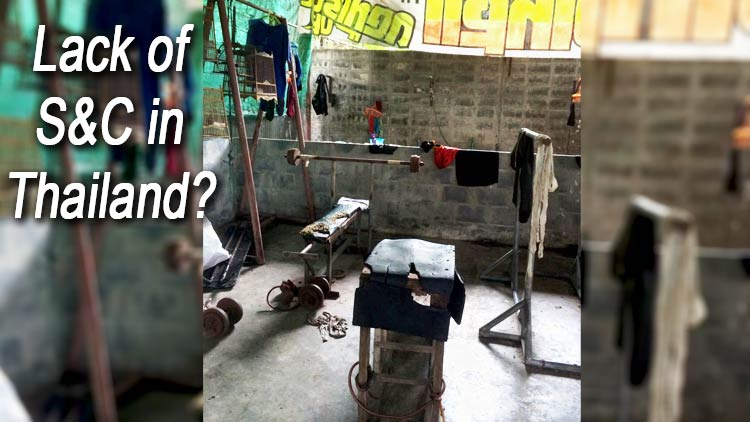 Following my interviews with Jordan Coe and Sophia Torkos, both full time fighters at different gyms in Thailand, I’ve been asked, “Are you surprised by the lack of strength and conditioning in Thailand?” … And I must say I’m not.

Generally the understanding just isn’t there yet, and there’s along history of training using traditional methods which have always seemed successful. And of course the misconception that all weight training slows you down is still commonplace too. And generally the attitude of “If it ain’t broke, then don’t fix it” prevails. Now I’m not saying that the training is all wrong in Thailand, of course it isn’t! But there’s much more athletically that could be squeezed from these fighters if they only knew how.

Mari DeWees, a professor of sociology at Florida Gulf Coast University in the United States, has been studying Muay Thai academically since 2013. And she’s found in Thailand there’s concern in the Muay Thai community that foreign fighters have the strength, the power, the knowledge, and the nutritional education to the extent that, given some time, they will dominate the sport, and are already infiltrating.

Some Thai coaches have even cited a lack of focus on exercise science, nutrition, and varied training techniques as the basis of concern. Professor DeWees goes on to say, “They’re aware that changes may need to be made, and some have called for an increase in sports sciences education.”

In my interview with Jordan Coe, he also says “It’s all science” when referring to his nutritional regimen. And his nutritionist, Sam Miller explains that although Jordan was sceptical at first, he became a real advocate once he saw the results achieved when doing things right. And when it comes to strength and conditioning, most fighters haven’t yet experienced real training either, and remain sceptical.

As a discipline, strength and conditioning applies to all sports and physical endevours. As a result there’s countless ways to train, which are more or less effective depending on what you’re sport looks like. The key is finding a coach that has taken the time to understand the demands of Muay Thai, and has designed training to suit these specific demands.

It seems common sense that training like a high jumper won’t significantly help a Thai boxer. But a rugby strength and conditioning program also isn’t going to cut it, the demands are very different. Even an MMA program is (and should be) different. But most coaches putting together strength and conditioning training don’t understand how these programs should differ.

Like I said in my video, S&C vs Thailand Method, once you truly start developing strength and power alongside all the other qualities, you need to be far more mindful of allowing recovery for adaptations (improvements) to take place. This is another area that Thai trainers struggle, making it difficult for them to successfully implement strength and conditioning.

Professor DeWees says, “Thais at various levels of the sport, promoters, gym owners, people who follow the sport on an international level, and certainly foreign students who come here, many of whom have backgrounds in kinesiology and physical therapy, are highly aware of the lack of guidance by Thai trainers in terms of recovery.”

There are many mistakes I regularly see Thaiboxers make in their training, some of which I’ve previously detailed further in a guest post on Sean Fagan’s Muay Thai Guy website.

Mistakes that are simply spoiling the potential effect strength and conditioning can have on a fighter’s performance. When this is not understood, it undermines the perceived effectiveness of such supplemental training. So unless you’re lucky enough to find a camp in Thailand with a good understanding of practically applied sports science, you’ll not find strength and conditioning featuring in their training regimens. It’s simply much easier to stick with the traditional methods and results.

But just as Jordan Coe has found when it comes to making weight, you can get much better results, and far easier when correctly applying sound scientific principles. The same is true of athletic development.

Even with rudimentary equipment, there’s plenty of scope to do a good job if you know how. Tim Ramos spent an an extended time training in Thailand while also using my online strength and conditioning program. He has said, “Thanks for your support throughout the program, especially in making adjustments to suit my individual situation in Thailand. I experienced remarkable athletic development that led to my rapid development in the sport. It was definitely the right decision to have invested in your program and mentorship.”

S&C Training While In Thailand

When training at a traditional gym in Thailand, trainers can be very demanding of your training time and it can seem impossible to factor in supplemental strength and conditioning training (especially if Thia trainers don’t understand it). But here’s a couple of suggestions for openminded fighters training in Thailand that do have access to gym equipment.

Now, exactly what you should be doing in each of theses suggested sessions depends on your periodised program, which is another story! But that’s how I’d try to fit them into a more traditional training regimen in Thailand — as most camps are a little more flexible when it comes to the morning run in particular.

Things are definitely changing, and for over a decade now, I’ve personally been doing my best to move Muay Thai athletic training forwards. It’s exciting to think what kind of world class combat athletes Thai boxers could become if we could direct all that passion and energy into more efficient preparation.

I hope you’ll start seriously looking into your own training program as a whole going forwards, and start using all training methodologies available to you to get the best out of yourself. Get yourself on my mailing list by signing up for one of my free learning resources, check out the other articles and videos on this site, research as much as possible, find yourself a trusted S&C coach and reap the rewards. It’s not about doing more, it’s about doing it better.