Are You Wasting Opportunities Your Opponent Isn’t?

But… by the end of the session, the fighter gets it.

He’s come away with a list of things to work on, that’ll make him a better fighting athlete, and some cures for the reoccurring niggles that seem to plague his knees and shoulders.

And all stuff that would remain unchanged had today been another “high day”.

You see, high intensity days are a chance to test your integrity on the limit of your ability. But you need integrity first.

And there’s supreme value in correctly scheduled lower intensity sessions and blocks of training in your training programme. Of course, you don’t get better during the training session itself; it’s how your body adapts to the training stimulus during the recovery that makes you better…

…You send a signal in training, and your body responds during the recovery.

But fighters should never see lower intensity work as “dead-time’, merely waiting for recovery and training adaptations to take hold. It’s a chance to speed up recovery so you can be back at higher intensity sooner…

And CRUCIALLY, it’s a time to sharpen up everything that becomes a bit ragged under higher intensity.

We know everything is habit. Repeat enough of that crappy movement and you anchor crappy habits! 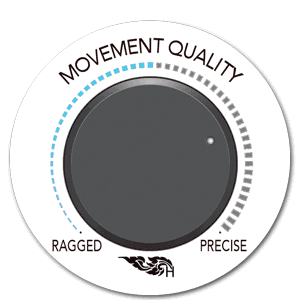 Backing off from higher intensity to allow recovery is THE opportunity to turn the dial from ragged-to-PRECISE. Many fighters (and even coaches) don’t take this advantage. And it’s a mistake.

Sometimes you need to slow down to take in the scenery that you missed going at full pelt.

Let me run you through a personal example.

I’ve Been Doing It Wrong… Ever Since I Could Walk

Today, I had scheduled a low intensity “cardiac output” run, designed to improve my aerobic capacity… if you want to know more about this training method and how to use it in your program, get hold of my free video/webinar series by clicking here >>

As well targeting eccentric cardiac hypertrophy to again build my aerobic tank, my other objective was to build some progressive loading into my Achilles tendon tissue, which has started to degrade now I’m past 40 years old (just a fact of life – and I’ve used them HARD)!

Previously, runs had felt good initially, only to feel an unhappy grumbling from my calves/Achilles beyond 20-minutes of springing along…

So this time, I took 10-minutes before I grabbed my dog Logan and strapped him into his canicross harness (which he “dislikes”), and I prepared my ankles for my first run in quite some time.

I went though a Release-Open-Anchor prep routine on my foot and calf to improve the quality of my foot strike on the floor, and then I headed out into the sunshine…

The result… the highest quality 30-minutes of running I’ve ever managed. I maintained “short foot” activation for every foot strike of that run, and it felt awesome!

The elastic recoil from my foot contributed vastly more than it ever had done, adding to the already effective stretch-shortening spring from my calf and Achilles.

My left knee – which can tend to slightly collapse inward (valgus) – was tracking strongly and was well aligned with my foot.

My target pace was steady enough for me to consciously change the way I moved on every step, rather than lazily slipping into old (less effective) habits.

I even had time to reflect on the last 4-years…

As I sprang along, I could feel the common denominator wasn’t how my hips controlled my knees (which I’d been working on), but actually my feet!

So massive thanks for the lessons learned from Darren Stratton at Strength & Conditioning Education. The feet have it!

[box type=”info” title=”Bonus Extra”]Here’s a little info that’s worth sharing right now, regarding the importance of your feet in all things movement courtesy of Kelly Starrett…

Setting The Cart Before The Horse

As always, we should seek efficiency first, and add effort on top of that. The problem is that most athletes (especially fighters) default to effort first. But this can create bad shapes, and bad movements…

And outwardly, a posture or shape can look right, but inwardly the wrong muscles are being activated to create it. Not efficient. Not as effective. Not safe!

Being just a little off target is still a miss! So don’t miss the opportunity to sharpen your tools, to scrutinise your movement quality, to double check what you think you know.

Lower intensity days are always the days I learn the most – my break though days… and it’s the same for my private clients too.

Don’t lose the opportunity to improve your quality during the lower intensity work – or that closed-feedback-loop becomes a wasteful open-loop process that can progressively degrade your movement.

Remember, as well as correctly hitting starting posture-A and the finishing posture-B, the transition between the two is crucial.

It’s not being obsessive to scrutinise this stuff. Get it right. Don’t waste opportunities to get better. It pays massive dividends, both in economy of effort, absolute maximum power and injury reduction!