Show Some Finesse, As Well As Blood And Guts

Training requires discipline, but not the kind that fighters usually think of…

This discipline I speak of is “restraint”.

Knowing when to show restraint is what takes an athletically gifted fighter, and turns them into a beast!

It’s the same kind of restraint you’d show when sparring a novice (well I’d hope so anyway — if not, get out of my gym)!

…Just because you can knock them out, you don’t, because that won’t help them. What will they learn from that? How will it help them progress?

So it’s not the discipline to always work as hard as you can. Real fighters are good at that, and in a weird way, it comes easy to us.

But when it comes to programming your resistance training in the weights room, some restraint is needed. Just because you can lift more today, should you?

…How will that affect your progress next week, and the week after that?

I see so many fighters getting this completely wrong… so much wasted effort!

…But, you will find that next month you do have more! And the month after that, you’ll have even more, and so on… If…

…IF you show as much restraint as you do “nose to the grindstone” work ethic.

This is the DISCIPLINE that will make you the best fighter you can be.

Your training addiction will encourage you to do more than is optimum, more than is good for you. Speaking as someone who now carries injuries as a result of a “deviant” past of excessive training, please take this seriously.

…It’s balancing the Jekyll and Hyde within you, to take you to a higher-level, and without unnecessary long-term casualties too…

Show some finesse, as well as blood and guts!

Save “Mr Hyde” for your HIGH training sessions, and of course, for the ring. Show you’re opponent Mr Hyde!

Planning Training Is THE Secret

Periodising or planning your training is how to balance your efforts for best effect. It’s the science of applied training.

There’s lots of ways to do this, there are many “periodization models” that you can use… but here’s the way I’ve found works best for Thai boxers, considering:

I’m not going to start spouting periodisation terminology, because it’s just confusing, and planning training can be very simple (if you know how).

I typically divide training up into four-week blocks that focus on developing certain (complimentary) athletic qualities, while maintaining others.

Each week has a desired loading level, and it builds progressively before it backs off again. There’s a LOW week, a MED week, a HIGH week and a DELOAD week.

The next block follows the same pattern, and you get better and better every month. 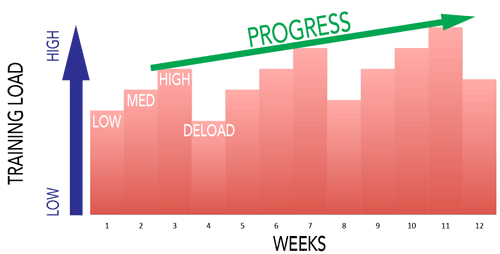 “Why start low? Why not just rock up and go as hard as I can from day one?”

Because you don’t need to.

Shock horror! How dare I suggest you don’t need to work hard!

Steady there cowboy, you do need to work hard, just not all the time. In fact, flat-out every session doesn’t work in the longer term.


Here’s a couple of analogies for you…

When you get a headache, do you take just a couple of tablets as prescribed, or do you down the whole lot, just because you can?

Anyone for an OD?

It’s a case of understanding the minimum dose required to achieve the desired effect – more won’t be better, and can actually do harm.

Now consider a standing-start from the bottom of a hill on your bicycle. If you go straight in with a high gear, you’d stand on the pedals and crank too slowly, or even stall completely.

You wouldn’t have built enough momentum yet (and you’ll look a right div).

Starting in a lower gear, and progressively shifting up gears as your momentum increases means you get to that higher gear, and perhaps even higher.

In a similar way, your body adapts each week to the training load, effectively building momentum to allow you to hit that “high week” and beyond.

“But why deload? Why not just keep increasing?”

…Because you physically CAN’T. You’ll get stuck, and even slip backwards (and probably pick up an injury too).

Here’s another analogy for you…

When you perform your pad rounds, would you just go continuously for 15-minutes without stopping. Why?

…Because your performance would drop off?

And what if I said that every 3-minutes I wanted you to work even harder?

As a Thai boxer, you appreciate the need to rest between rounds so the next one allows adequate quality. You need to recover.

It’s the same with your resistance training sessions, but over the a period of weeks not minutes.

And the “deload” week in your training plan isn’t complete rest anyway. It’s reduced loading to allow recovery, while giving you a chance to anchor high-quality movement (after things get a little ragged during the “high” week).

Ok, I hope that makes sense?

I’ll stop there before I go into too much depth for today… I’m going off on one again.

Over to you. Now take an honest look at how you plan your own training. How can you manipulate it to take you much further forwards in three-months time, rather than just going around in circles?

Let me know your thoughts!