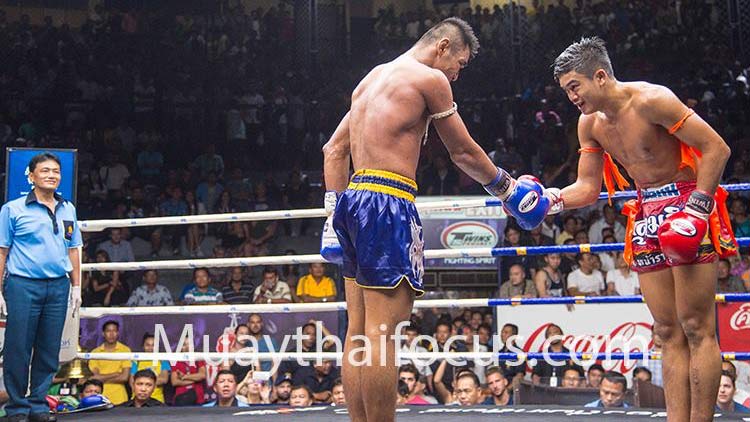 Everything evolves, and in the quest to attract a greater paying audience, Muay Thai could be pressured to follow the model of pro boxing or the UFC.

And don’t get me wrong, there’s a ton of good marketing points to be taken from these established combat sport giants, but…

…I hope Muay Thai doesn’t lose its essence in the process.

What is the “essence” of Muay Thai?

What integrity would be the greatest loss to Thai boxing, and in my opinion destroy everything I love about this awesome martial art and combat sport?

For me, it’s not the training methods, the number of rounds fought, or if a Ram Muay is permitted or not. It’s not even the rules and judging criteria…

I think Rob Cox captures the essence of Muay Thai in his photo of Thanonchai squaring off against Sangmanee before they fight (at the top of the page).

Rob has witnessed these two warriors fight each other on many occasions, and of their encounter on the 14th September (2016) he says,

“So 9-fights now between these two (something like 5 wins to Thanonchai, 2 to Sangmanee and 2 draws), and every one a war!

“Last night Thanonchai got cut, Sangmanee was cut and got a broken nose. Every time though, they show this huge respect for each other.

“Muaythai the greatest sport on earth!”

THIS is what attracted me to Muay Thai in the first place, and has kept me faithful… the perfect balance of ferocious physicality and psychological respect.

With so much arrogance and ego permeating modern life, especially combat sports, this is a very rare thing. Hold on to this, don’t let Muay Thai go the way of hate (and fear).

Build each other, challenge each other. Always remember you’re opponent has worked as hard as you to earn the right to be in the ring with you.

You’re both passionate about Muay Thai. You don’t have to be friends, everyone has a different viewpoint and opinions, and that’s fine – but you can still respect each other.

You may think behaving arrogantly gives you an advantage, and others will respect you more.

Arrogance is a lie the insecure tell themselves… It’s borne out of self-doubt rather than confidence.

Now take another look at the faces in Rob’s photo at the top of the page. Both the fighters and the referee exude respect — and pride in Muay Thai.

The fighters also purvey an unspoken message, “You spur me on.”

Change is inevitable, but please don’t let Muay Thai ever lose respect. Preserving this is down to the fighters and the coaches, no one else.

Mind, Body, and Spirit in Muay Thai – the Hidden Qualities of a Complete Fighter

Be the Best Muay Thai Coach