I’m often asked why Thais are so powerful without using resistance training.

And here’s one I received recently…

“And then lastly I watched this video made by Firas Zahabi in which he said that strength and conditioning can make you hit harder but only to a certain extent dependent on ones genetic makeup and he said you can’t get an average guy and get him to eventually have the knockout power like Mike Tyson, he said that you either have it or not and usually you know if you have that knockout power at the beginning of your MUAY Thai journey

To figure out the truth, we first need to understand what we mean by the term “power”.

Most Thai boxers will assume a fighter is powerful if (compared to their body weight) they can deliver a hard strike on the pads.

But this blurs the distinction between efficient Muay Thai technique, and raw biomechanical power.

These are the two key performance factors affecting how much power is delivered into a target.

Thai nak muays don’t waste any of the power they have. With beautiful, efficient Muay Thai technique, they can repeatedly deliver most of the physical power they have into a target.

Physiologically the resistance used isn’t high enough, the repetitions completed are too high, and the rest intervals are too short.

However, because of the high volume of practiced repetitions, Thai nak muays appear powerful, without actually being powerful.

Imagine a fighter throwing their strongest body kick into a heavy bag set up with force measuring transducers to record the impact.

Warmed up, but completely rested, the fighter gives their best effort in an attempt to get the highest reading possible in one shot.

We could breakdown the maximum potential power delivery into three stages:

How close your body gets to expressing all of that potential depends on how you train it.

This is the force generating “input” into the system.

There are many fighters with a great deal of genetic power potential that they’ve never tapped into… their training has never exploited it.

Not everyone has the potential to hit as hard as Mike Tyson. But everyone can express more of their personal genetic potential – if they train in a way that nurtures it. 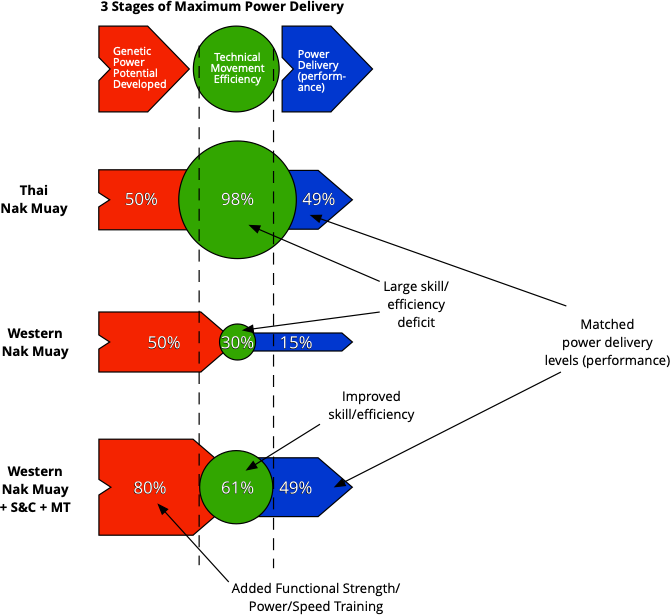 In my experience, it wouldn’t be unfair to say that typically fighters using traditional Thai-style training are only expressing about 50% of their maximum potential power.

This raw power is then applied to the skilled Muay Thai technique. Here the Thai-style Nak Muays have incredible economy of movement, honed through thousands of repetitions and years of practice.

Most of the raw power that they possess is squeezed into the technique, very little is wasted. The technical movement efficiency could be say, 98%!

This is the final output of the whole system.

Squeezing Everything Out Of The System

As Muay Thai athletes it’s important we don’t become preoccupied by the final power output of the system. Breaking down the process allows us to find areas that can easily be improved.

For typical Thais, despite good final power delivery, if we access the power going into the system – with loaded jump squats for example – we’d find they’re lacking.

I’ve certainly found this in my practical assessments with fighters in Thailand.

Now if we take a Western style fighter, who also hasn’t trained to specifically develop power in the weights room. They will also contribute about 50% of their true genetic power potential to the technique.

But without the thousands of skilled repetitions, their technique is poor and much of their power is wasted. Their technical movement efficiency is only 30%. This results ultimately in only 15% of their total potential power making it to the target. It’s like someone is standing on their water hose!

If we take the Western fighter, and incorporate an effective strength and conditioning program – that develops more of their potential power using exercises like kettlebell swings, loaded jumps, and Olympic lifting for example – we could expect to increase the raw power to 80% of their genetic maximum.

If this same fighter also put in the practice and improved their technical Muay Thai skill, moving from 30% movement efficiency to say, 61%…

Then this Western fighter would also deliver 49% of their genetic potential power into the technique – matching the Thai.

This is how a well structured strength and conditioning program can boost the performance of any fighter.

Fighting is way more than just maximum power delivered into a target… It’s very much a tactical game involving fighting styles and ranges – which goes way beyond the scope of this article.

My intention is to shine a light on the question of power specifically, not tactical ability.

There are many factors that come together in achieving the win…

But with the importance of techniques showing an effect to score, and of course being capable of a KO stoppage, then power delivery is an important quality in Muay Thai.

Thais deliver powerful strikes without training for power! Think what they could do if they did!

In Thailand the training builds efficiency through a high-volume of repetition. 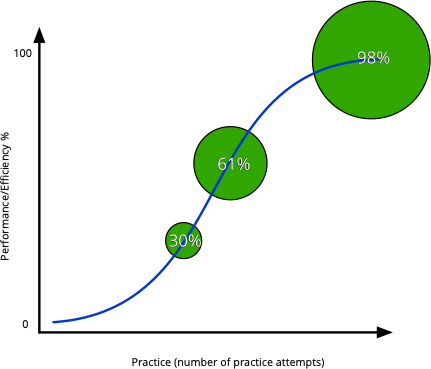 On a classic learning curve, after a slow start, then a rapid improvement, skill levels begin to plateau as you near elite-level efficiency.

You may not be able to match the number of skilled repetitions executed over years in a Thai training regimen – and as a result, not move as efficiently in your technique…

But you can train in a way that better builds your raw power, allowing you to match the power levels of the Thai-style training regimen with a fraction of practiced repetitions.

Of course, if with extensive practice your skill levels have plateaued, and you’ve not fully developed your raw power with effective strength and conditioning training…

The key to hitting the next level is not just more technical practice – building raw athletic power is.

And this doesn’t have to be a choice of one OR the other… even in Thailand.

Keep all the training that improves Muay Thai performance (skill repetition, repetition of well practiced skill under fatigue etc), and replaced the “filler” work – that just results in fatigue and doesn’t move the fighter forward anymore.

Think of all the training hours each week in Thailand that are spent NOT Thai boxing – running, skipping, bodyweight exercises, high rep/low weight resistance training etc.

Rather than heaping a greater workload on top (the typical Thai solution to training), dial in work that actually improves athletic preparation (and reduces injury too).

In just 2-3 years, you can have trained to express most of your genetic strength, power, and speed potential – and made significant inroads on those that have even spent 3-times that long training purely in the traditional Thai style.

You can have your cake and eat it too, it just takes a little more thought and planning. And the results are worth it.