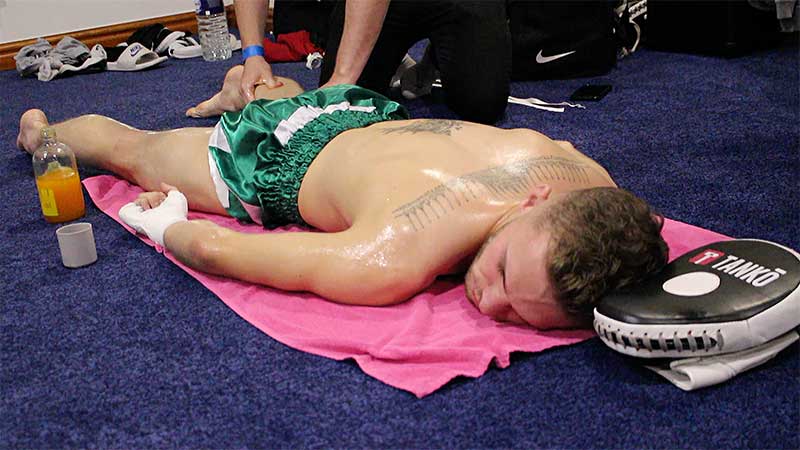 A vigorous rub down with Namman Muay massage oil (boxing liniment), was a key part of my personal pre-fight preparation. And I think every Thai boxer has an amusing story about how this strong smelling, fiery-hot massage oil has ended up places it shouldn’t!

In Thailand, pre-fight massage is the norm – it’s a non-negotiable part of the fight prep ritual. And Western fighters, once exposed to this practice, have enthusiastically adopted these massage methods themselves too.

But is a pre-fight massage really of any use?

The expected benefits of pre-event massage are typically…

However, looking at the research into the effects of pre-event massage on athletic performance, the evidence doesn’t generally seem favourable.

For example, a study by Arabaci (2008) found an adverse effect on vertical jump, speed, and reaction time following swedish massage.

Mechanically manipulating blood through the muscle also doesn’t constitute a warm up, as the required cardiovascular and motor pattern/neurological responses don’t accompany this preparation technique.

Barlow et al (2004) also found that hamstring flexibility wasn’t significantly affected following massage either… unless you’re particular “tight” to begin with. If your flexibility is good, then a massage won’t change much.

So despite the evidence, why do I (and every Nak Muay) value their pre-fight massage so highly?

Just When It Seemed Pointless

Going through the published research, there’s a lack of well conducted or representative studies…

The types of massage used, the age groups and relative athletic levels of the subjects tested, the time interval between the massage intervention and performance testing are either unclear or not representative for Muay Thai pre-fight massage.

The effect of a Swedish effleurage massage is drastically different to the vigorous actions we experience in a Muay Thai pre-fight massage!

And the massage oils used are very different too! 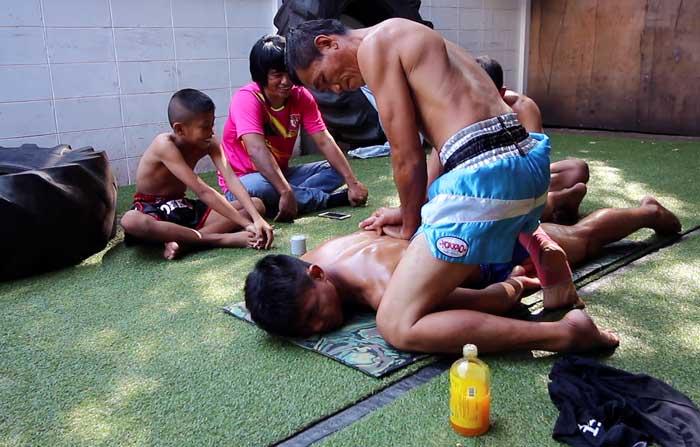 Manachai getting an afternoon massage treatment at the Yokkao Training Centre

Thailand’s pre-fight “secret sauce” is the notorious Namman Muay – boxing liniment. I’d love to see some research on the effects of this oil, but I couldn’t find anything. If you stumble across anything, please let me know!

All I do know, is that beyond the massage application techniques themselves, the oil does reduce bruising.

After training once, I’d picked up a couple of bruises on my thigh – from low kicks I’d failed to block. One bruise was very minor, the other gave me cause to break out the Thai oil!

Over the following week, I casually observed that the big kick bruise (that I’d rubbed oil into), didn’t blossom into a heroic bruise at all… rather disappointing!

But, the little bruise (that I’d not bothered to put any oil on) had turned purple, and continued to run through the various shades of yellow until it eventually faded away.

Although not a conclusive, controlled test by any means, this accidental observation has convinced me that Namman Muay oil certains does help minimise bruising!

And that’s a useful preemptive effect to take advantage of in a Muay Thai fight.

The oil also has an analgesic effect, numbing pain sensations too. Therefore, applying Namman Muay oil to our typical impact points (shins, forearms, upper arms, and lats) is the primary consideration in my opinion.

I’m cautious in saying that applying the oil to much more of the body can be a bad idea, as an active ingredient is methyl salicylate…

Sensitive individuals have even died from an overdose of over-the-counter sports medicines containing methyl salicylate, which if rubbed onto the skin at high enough doses can act as an anti-clotting agent and may result in serious health related issues! So don’t go silly.

Just like any “medicine”, you must be aware of safe, effective dosage. And It’s recommended not to exceed 40% coverage of your body with the oil.

Guyton (2000) concludes that massage can reduce pain by local lateral inhibition in the spinal cord.

And this matches my personal experience of a pre-fight massage. The combination of the massage and the oil makes me feel invulnerable!

My Hanuman, King Naresuan, and Phra Phor Pern amulets boost this mentality too… And the psychological state of a fighter is a major factor in the outcome of a fight.

In fact, Terry & Slade (1995) found that over 90% of winners and losers in Shotokan Karate competition could be predicted by their psychological state before competition.

So don’t underestimate the importance of this effect on your Muay thai performance! And here, massage undeniably has an impact.

Regardless of the type of massage, it’s well documented that pre-event massage benefits athletes psychologically.

Anxiety is generally reduced and mood improved. The perception of recovery is also an awesome side-effect and a powerful ally to any fighter.

In a study by Hemmings et al (2000) looking at repeated punch performance of boxers following massage, it was concluded that massage doesn’t have a detrimental effect on physical performance…

And surprisingly, seemed to encourage the boxers to work harder – pushing their blood lactate concentrations higher in their repeated efforts. Which was attributed to the boxer’s perception of recovery and their subsequent effort and energy expenditure. 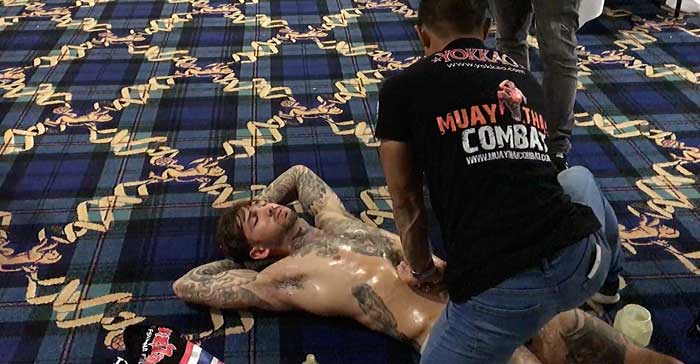 The massage is an opportunity to go into your mind-space, and give yourself the psychological boost that you need – whether that’s to calm down a bit if you’re getting anxious, or rev yourself up if you’re feeling flat.

Western fighters often stick the headphones on at this point, and play their own motivational tunes!

And this tactic really helps your mindset – by employing the compounding positive reinforcement of multi-senory inputs… Neuro Linguistic Programming (NLP).

Sports psychological tools, like visualisation, are amplified when you bring in the other senses too.

By adding hearing, physical feeling, smell and taste to your mental imagery, you can seriously boost the effectiveness of visualisation on your mood, arousal, and ultimate performance.

For me, I would mentally playback a visual highlights reel of my best, most damaging Muay Thai shots…

And while I “saw” those strikes buckling my opponent, I’d “hear” my own unique soundtrack playing – often my ring entry music (either in my mind, or literally on my headphones). I’d also hear the slapping/smashing sound as the shots landed, the sound of the crowd, and even the traditional Thai fight music too.

I’d “feel” the shin block I put in the way of my opponent’s kick, and then the impact on my own body as I landed my own strikes in return.

I’d feel myself turn the whirling sensation in my stomach into excitement and anticipation rather than anxiety and apprehension.

I’d “taste” my gum-shield in my mouth, and the metallic taste of blood that I’ve also come to expect.

These are all anchors, that can be used to program and trigger a positive psychological state.

Even now, if I smell Namman Muay liniment, my body gets energised and I feel ready to fight!

For Nak Muay, a pre-fight massage is effective preparation for Muay Thai fight – but the amount of value it provides depends on the fighter.

At the very least it does no harm, and used well it can make the difference between a winning and a losing mindset.

For me, the addition of Namman Muay liniment to the pre-fight massage makes not only a physical difference, but also a significant psychological one – providing a highly valuable olfactory sensory trigger to kick in my fight motivation and confidence.

Your pre-fight massage is certainly an opportunity to up your game and show everyone what you’re truly capable of.