When you first start Muay Thai training, you’re swimming in a sea of technical corrections! As time goes on, with consistent practice of the core (game-changing) movements and techniques, fewer corrections are needed to achieve reliable performance.

You’re moving along the continuum from novice to expert.

Repeating movements reinforces habits, forming motor pattern “engrams” that you no longer have to think about. Technique happens automatically, freeing you up to focus on other things.

Through focused repetition, now these major patterns are running on automatic, and you can turn your attention to some of the smaller things.

But although small, these things are actually now your limiting factors… exposed because the big stuff is out of the way. But there’s a problem.

Masked by your more obvious initial work, you’ve accumulated a lot of repetition of these undesirable habits (that sneaked in under the radar). You banked some unconscious bad habits that now happen automatically too.

And reinforced poor habits take 10-times more corrective repetitions to change them than it would take to reinforce a good habit from scratch in the first place!

So a more experienced Thai boxer who is looking to improve, must focus on not just practicing what they’re already good at, but spending 10x the amount of focus on changing their (unconscious) limiting factors.

And EVERY fighter, no matter how good, has limiting factors… the habits that need changing to make them even better the next time they go into a fight.

You can’t possibly work on everything to the same level all the time – there’s simply too much information. To function effectively you HAVE to filter for the priority tasks and crack on with those.

This means something WILL to fall through the cracks, no matter how small.

A fighter closer to the expert end of the continuum has persevered, re-examined their habits, and invested effort and repetition on changing any limiting factor habits they’ve revealed as they’ve drilled down over time.

As a novice, you’ve only scratched the surface and exposed the most obvious of corrections. As you become more of an expert, you’ve drilled down to hit deeper, more subtle corrections.

Those that get stuck, fail to find the corrections that move them forwards, and stagnate on the continuum novice to expert continuum.

Non-Technical Limiting Factors (Why Some Never Make It) 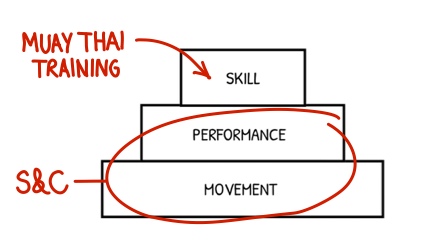 Some of these limiting factors are not born out of a deficit in technical skill, but rather inadequate foundation movement qualities (mobility, stability, and coordination) or performance qualities (strength, power, speed, and endurance).

But these physical limiting factors will have negatively affected technical skill practice, and caused a poor movement habit to be reinforced.

Now you not only have a technical habit that needs 10x the effort to correct, but also a physical inability to change it – due to inadequate foundation movement or athletic performance qualities.

If your hips and core aren’t strong enough to generate and stabilise your maximum power on one leg, no amount of kicking the heavy bag is going to significantly change this.

To reach closer to the expert end of the continuum as quickly as possible, you must consider all facets of your training… simply doing what you’re already good at will ultimately stall your progress, and your motivation along with it.

A complete fighter takes care of their movement and performance qualities along the way, so they never become the bottleneck in their technical ability.

And they’ll stand less chance of unknowingly reinforcing poor habits along their journey, as they focus on the big, obvious things each step of the way.

How To Go From Beginner To Pro, As Fast As Possible

To make the quickest progress…

1. Start resistance training in parallel to Muay Thai training, from day one

– That way you’ll build a robust, stable body that allows you to practice your Muay Thai skill with less errors

2. Use every training session, and every fight, as an opportunity to honestly expose your limiting factors

– Don’t get touchy about critique, it’s where the gold is!

3. Lose your ego and work on those limiting factors, no matter how basic they seem to be, or how advanced your Muay Thai ability is

– The closer you are to being an expert, realise it’ll take more corrective repetitions to change your deeply embedded habits. It’s like becoming a beginner again… embrace it!

4. Understand your work is never done

– There are always improvements you can make, qualities that need more attention to prevent them dropping back again. As cliché as it may sound, your Muay Thai training is a journey, not a destination. There is no finish line. 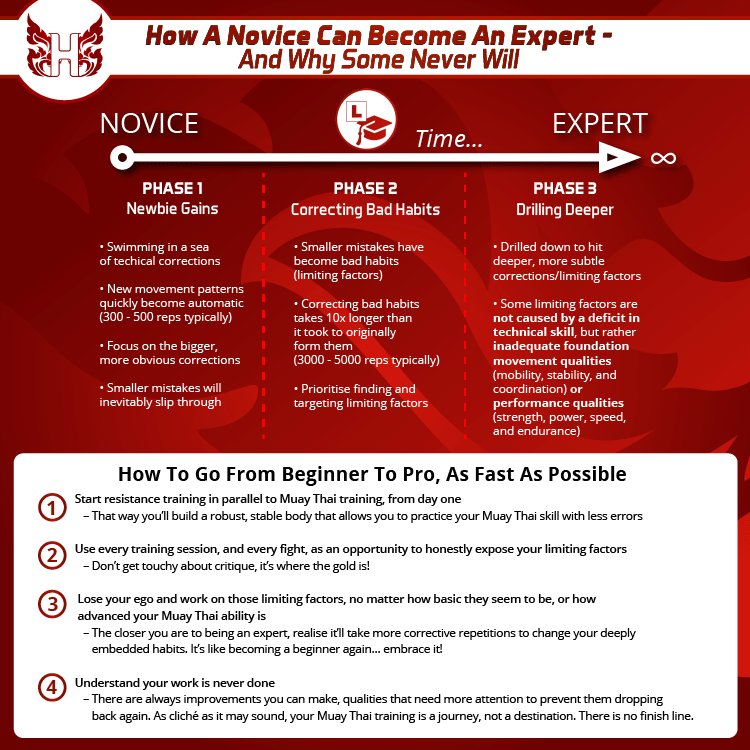 Don helps ambitious fighters & coaches take their game to the next level by bridging the gap between Strength & Conditioning, Performance Science, and Muay Thai.

We use cookies to ensure that we give you the best experience on our website. If you continue to use this site we will assume that you are happy with it.OkRead more