What Do Men REALLY Think of Women in Muay Thai?

Confirmed! Women are valued by Men in Muay Thai!

I want to start with the huge positive before I share the NEGATIVE I experienced in response to my recent podcast episode with the awesome Angela Chang.

Let me explain everything…

Join the most informed Muay Thai performance community out there!

After the podcast, I was shocked to receive an email from a guy that basically believed that women shouldn’t train with male fighters, that it “weakens their focus” and undermines their ability to fight at their best!

I couldn’t believe this point of view existed. And being blindsided by this, I wondered if as a man (not on the receiving end of such sexism) I’d missed something that was really there…

I wondered if there was a sexist element drawn to the outdated, traditional attitude to women in Muay Thai in Thailand.

I sincerely hoped not, and considered just ignoring it. But, I decided to front it up… I needed to check that the sexist guy emailing me was the outlier, and that I wasn’t!

So I posted a question in my Instagram stories asking, “Are women training in Muay Thai a distraction to male fighters?”

This was a very diluted version of the opinion I endured  email.

Even posting that story as a hypothetical question honestly made me feel very uncomfortable. I certainly didn’t want to promote this view point, and I hoped those that saw it wouldn’t mistakenly believe this was MY opinion!

Especially the women that saw it – sincere apologies if even posting that question caused any upset (and I hope to now make this up to you).

But in the male dominated Muay Thai scene, I had to find out how commonplace this sexism is. I had to play devil’s advocate to bait out any support for this, in my opinion, misplaced point of view.

And to my great relief, no one supported it. And the responses were incredibly positive for women in Muay Thai.

The replies I received from men were either:

A flat out, “NO, women aren’t a distraction”, or

“NO, I can’t believe this point of view exists!”, or

“NO, If anything, women in Muay Thai are an inspiration to men”

And what was striking, was there were multiple responses using the word “inspiration” in particular.

So out of the shit, grows a rose! 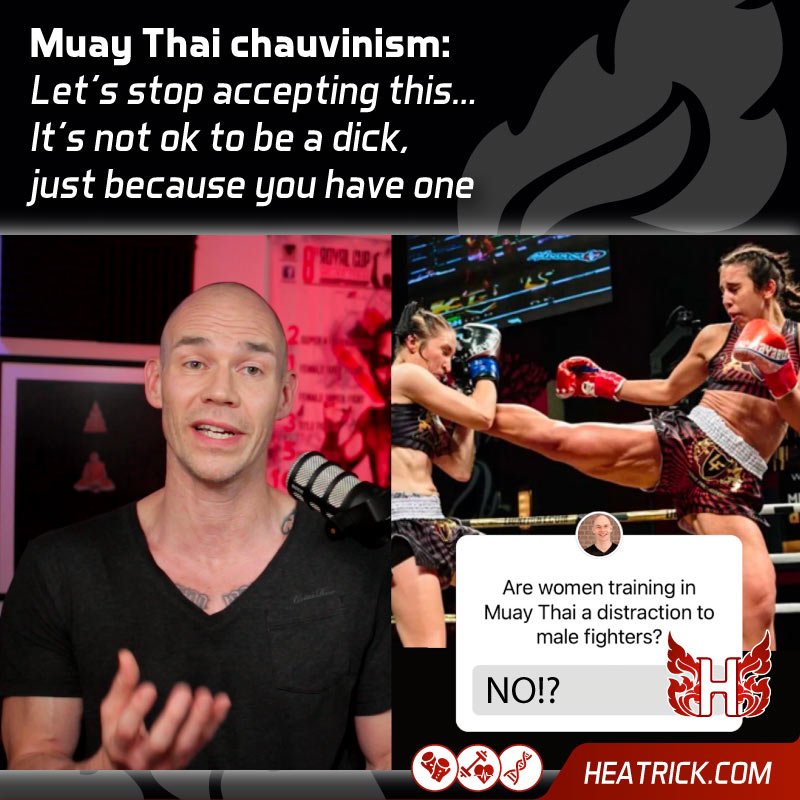 Quite honestly, although I love Muay Thai, if sexism at that level was commonplace, I couldn’t have been part of it anymore.

So this was a classic case of a “bad apple”. And if as a women in Muay Thai, you come across a man with a sexist opinion, realise it’s just him, and certainly not everyone in Muay Thai.

Thai boxers are inspired by “Jai Suu”, or fighter’s heart as Angela explained in the podcast.

We recognise grit and determination, and value those that show that heart, even above talent.

Success in Muay Thai, or anything, is about focus – eliminating distraction and doubling down on what makes you a better fighter. And some distractions are entirely your own making.

If you cultivate a habit of allowing yourself to be distracted, then that’s what you do. Blaming others, or external circumstances for this, is like blaming your shoes for tripping you up when you never bothered to learn to tie your shoelaces.

Learn to focus in everything you do, then that becomes your habit. It becomes your default, even under stress and fatigue – like in a fight.

It’s tough for men in Muay Thai, and we know that it’s even tougher for women.

So thank you to all the women that have the courage to train, let alone compete in Muay Thai. We men value you, you inspire us. And by far the vast majority of men in Muay Thai have truly got your back.