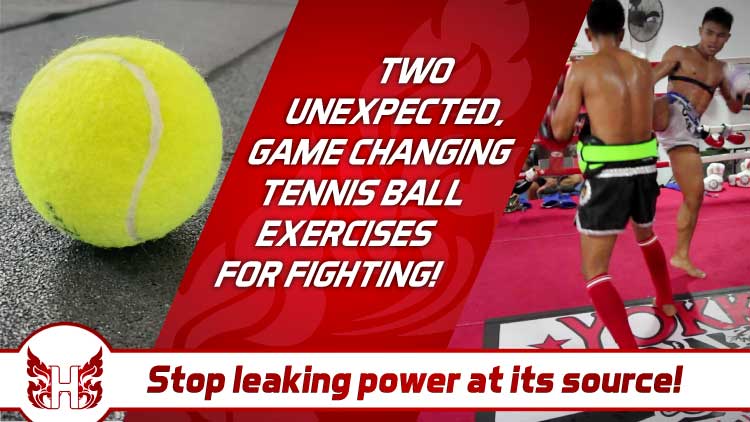 Instead, I’m going to share two strength and conditioning exercises for fighters using a tennis ball…

And not to mention, reducing your likelihood of injury at the knees, hamstrings and lower back too!

If you’re looking to 80/20 your training, and focus on the critical few exercises instead of the trivial many, then you’re in the right place.

First up, I see lots of fighters with either overworked feet, or habitually flat feet.

And when your feet aren’t producing force from the floor efficiently, everything suffers…

From footwork and timing to generating power in all your strikes.

Imagine trying to fight on a sandy beach instead of a solid ring surface… Structurally poor feet reduce your stability, waste energy, and rob you of both power and speed in a similar way to attempting to accelerate movement on a beach.

Muay Thai is very demanding of your feet and calves.

This region of the body gets a lot of work, causing the sole of the foot (and the plantar fascia in particular) to get jammed up. Making it a less effective spring, and unable to efficiently return energy from the floor up through your body’s kinetic chain and into your strikes.

Your body leaks power right at its source!

Fighters with flat feet are also more prone to a valgus collapse of the knees, allowing their knees to cave inward, stressing the knees under load and fatigue.

And I’ve literally seen flat footed clients go down a shoe size when they used the following exercise on their feet a few times a week.

The first exercise is the Tennis Ball Foot Release…

And to maximise the  progress made from releasing your plantar fascia like this, the bonus move is the Short Foot Exercise.  Use this to strengthen up your feet and maximise stability and power transfer from the floor…

This next exercise teaches your body to, in the words of the legendary Ice Cube, “Get Your Ass in to it!”

The glute muscles are the largest muscles in the body, capable of generating a lot of strength and power. But so many fighters don’t fire them at all well!

I’m sure as a fighter you understand the importance of using your hips to generate the power in your striking techniques.

It’s the hallmark of a more experienced fighter compared to the muted hip movement and limb focused efforts of a beginner.

But do you know if you generate hip extension movements primarily using the glutes (as you should) or using the hamstrings instead?

Overusing the hamstrings to create this shape not only wastes energy by using a smaller, weaker muscle group to do the job, but also places extra stress and work volume  on the hamstrings too.

If you keep getting hamstring injuries, this exercise can reprogram how you move and save you!

And better coordinated hip extension, instead of using lower back extension, will reduce your likelihood of lower back injury too.

Do you create a ‘lookalike’ hip extension shape without using your glutes enough?

If you want to really unlock the power of your hips, use a tennis ball to perform the Cook Hip Lift to assess, correct, and activate hip extension before your training sessions…

There are many other strength and conditioning exercises using a tennis ball, but for me, these two will make the biggest difference to your fighting movement and power.

Give them a try 3 or 4 times a week, for 3 to 4 weeks, and let me know how you feel it changes your fighting movements as a result!

And if you found these videos useful, don’t forget to subscribe to my YouTube channel here too.