In this episode, we ask how do Thais train so much and explain why you don’t have to!

I’m often asked questions similar to this one from Alex…

“I was wondering something while I was training at Attachai. The sessions over there are way harder than I’m used to, but I assume he just puts me through Bangkok training. ⁣⁣

⁣⁣⁣“How do Thais do this twice a day + running so much? I mean they have mostly long careers and I’ve never heard the Thais talk about overtraining”⁣⁣⁣

And the answer isn’t only relevant to those of you training in Thailand, but anyone training in Muay Thai anywhere in the world.

How Do Thais Train So Much?

Muay Thai training in the motherland affords fighters an incredible opportunity to rapidly level up, through the best technical and tactical training and fighting opportunities there are.

However, there are areas of limitation when it comes to physical athletic preparation…

⁣⁣⁣Generally, Thais don’t understand how to program progressive training. They throw everyone into largely the same regimen, regardless if they’re beginners or seasoned pros.⁣⁣⁣

⁣⁣⁣And those that can’t keep up, or become injured as a result are deemed “lazy”.⁣⁣⁣

“I was training from 6 in the morning until 9 in the morning, and then it was 3 ’til 6. And after a couple of days I was burnt out!

I came back to the gym the next day, and they said, ”Where was you yesterday?”

I said I was tired, I needed a break. And no-one spoke to me for two weeks!

Like I did come to the gym, and no-one said hello… They’d just hold the pads not really say anything to me.

It took two weeks, training twice a day again, for them to start doing anything!

I think rest is as important as the actual training.” 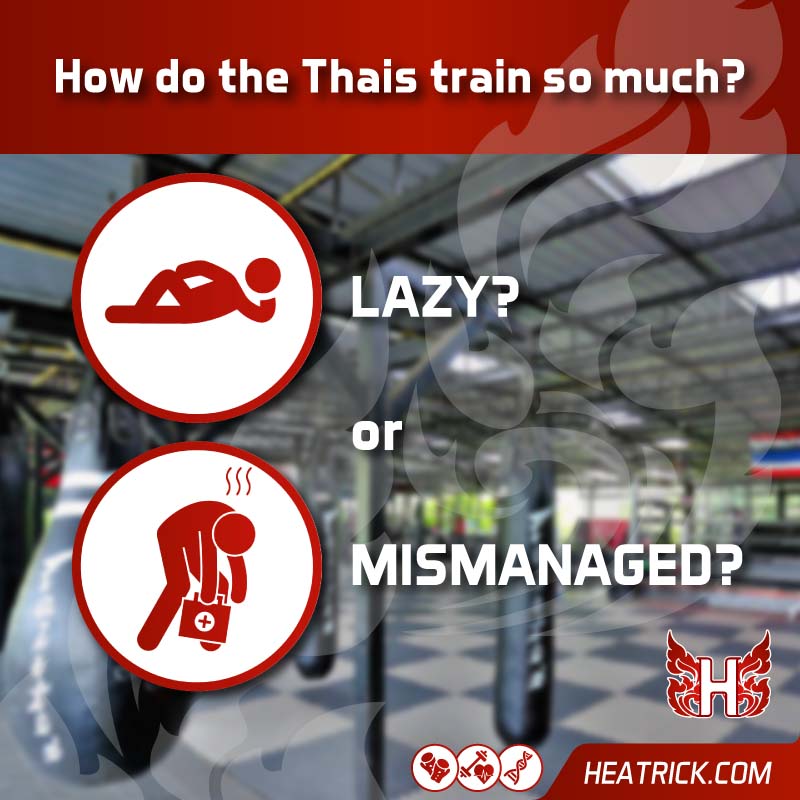 Any successful Thai nak muay started training at a young age – benefitting both from a slightly less demanding training routine, and being younger (recovering well from training) too.⁣⁣⁣

⁣⁣⁣But even so, of the hundreds of thousands of child nak muay in Thailand, most are broken by the training and discarded.⁣⁣⁣

⁣⁣⁣Only the genetically gifted, those able to withstand the high volume of training without becoming injured, make it as an adult.⁣⁣⁣

⁣⁣⁣These fighters aren’t necessarily the best technical fighters, only the most robust.⁣⁣⁣

⁣⁣⁣Many technically and tactically superior fighters will be discarded simply because their training was mismanaged – wasn’t progressively programmed.⁣⁣⁣

When I posted about this on Instagram, Liam Harrison also commented…

“A massive amount of Thais are burnt out in their mid 20’s and fall out with muaythai and disappear.

It’s only the elite guys who start to earn big money who stick around into their 30s and onwards.

When I lived there, I saw fighters who were top 10 ranked in stadiums by time they were 18-19 at the gym I was at, and at 21, they’d had enough and just started holding pads instead, as the training was killing them”

⁣⁣⁣Overtraining is real, and so are overuse injuries. And there’s a bone yard (of discarded fighters) that you don’t see.⁣⁣⁣

And the truth is…

⁣⁣Even Thais come undone when they’re training changes too much – even in as little as 5 mins work.

This surprised me too! Let me explain…

When I carried out athletic performance assessments on elite Thai boxers in Bangkok, with a 5 minute shuttle run in the morning…

I was shocked they told me their legs were too sore to kick properly when they rolled up for their afternoon training session!

These full time pro Thai boxers, with well over 15 years of training for 3 hours, twice every day, 6 days a week…

Were complaining about a 5 minute Maximum Aerobic Speed (MAS) shuttle test – that even my health and fitness clients back home wouldn’t have any issues with.

These Thai fighters were finding that any new stimulus, even something very small like an increase in running intensity with demands of single leg stopping and turning, was a total shock to their bodies.

They were experiencing DOMS (Delayed Onset Muscle Soreness) for the first time since they were little kids, just starting their Muay Thai training.

DOMS usually peaks between 48-72 hours after exercise. And these guys hadn’t even hit 8 hours yet!

We know that muscle soreness happens as a result of damage caused by doing something that the structures aren’t adapted to.

This could be a significant change in volume and intensity, or performing a new movement through a different range of motion (ROM), and eccentric (lengthening) muscle actions are responsible for soreness, not the concentric (shortening) contractions.

These fighters were adapted to what they’ve been doing, day in, day out for years. But certainly not adaptable.

Now you can understand why you can’t just jump into the same regimen as the Thais without a progressive lead in either! And you shouldn’t be expect to.

Also, it’s easy to overstep the (entry) mark when the level of general preparedness isn’t being addressed.

DOMS aside, the fact that elite Thais can experience such a strong reaction to a 5 minute activity also points to something far more insidious for those training full time in Thailand…

Generally, Thais are failing to understand what sport science calls the Law of Accommodation.

Despite all of their years of intense training, they are no longer “adapting” (getting better), they’re merely “accommodating” (staying the same).

That’s a lot of time spent tearing up your body for no further atheltic improvement.

To get better, they must progressively plan their training better…

Introduce various training stimuli for long enough to reap the rewards, and then change it up before it goes stale.

Throwing more hours at your training is one way you can do it, but this quickly creates a glass ceiling, limiting your ultimate progress …

Once you’ve maxed out the number of training hours you’ve got, you’re stuck.

And in reality, this ceiling can easily be broken, if you understand how to structure training more scientifically.

Luckily for Western fighters, by far the vast majority of Thai gyms don’t understand how to do this, and the traditional culture hinders their advance in this respect.

without taking on new learning about physiology and performance, and without attempting to improve things.

“Using the example of age… You do not challenge or question a person that is older than you – out of respect for their age and their life experience.

“So that’s tricky in a gym environment, with trainers for example… And I do give an example in the gym where that kind of went wrong.

“Because in our culture we reward people for job performance, contribution to the business, or whatever… In a Thai business, usually older people are the ones, they’re the decision makers, they’re the ones in charge.”

Such as training twice a day, 6 days a week, taking a nap between sessions, and with little or no other work or family commitments…

Western fighters CAN use a progressively planned (periodised) training program that plugs all the gaps missed in traditional Muay Thai training.

All it takes is some fundamental resistance training equipment, and the knowledge of how to use those tools to optimise Muay Thai performance.

And if you are training in Thailand..

How you can swap out even just 2-3 hours a week from your 30+ hour training week, to reach new levels of physical performance – even if you’ve been training there for 15 years or more!