Being Both Big AND Strong Hits Harder – Bigger Weight Class

Continuing our look at who hits harder, now we consider fighters in different weight classes and the effect this has on the physics of striking!

The last episode, “Fat Loss: Who Hits Harder, Big Or Fast?” created some fantastic points of discussion. And shone a light on some areas of confusion too. In this episode, I’ll take key elements from Adam’s comment to focus on one area of confusion right now…

“…knockouts in the heavyweight division are WAYY more common.  Yet if we say the strike is proportional to the velocity squared, then the little guys should be generating double and triple the punching power.  If that were true, the lower weight divisions would be KO after KO.”

In this episode we’ll explore why (despite velocity being more important than mass in striking) a heavier fighter generally hits harder than lighter, faster ones. And how you can leverage this understanding to make yourself a harder hitting fighter in your own weight class.

If you’ve not seen the previous episode, I’d recommend you check that out first to understand the context of everything I discuss this time around. You’ll find links to that on the show notes page and caption for this episode.

It’s important that each episode sticks to one thing or we can go off on a tangent, becoming distracted by related, but irrelevant topics. This confusion renders it impossible to take solid steps that will inform higher quality training.

In the last episode I outlined why a particular fighter, losing fat alone, will hit harder than he would carrying the extra body fat.

In this episode, we tackle a different question. We are comparing different fighters, even in different weight classes.

Let’s look at how this changes our analysis from the last episode. Last time I explained how kinetic energy was a useful way to determine which of two equally strong fighters (or more accurately, two fighters generating the exact same force), hits harder when one carries extra body fat.

We changed just one variable, mass. And I showed how as a result, strike velocity would be the differentiating factor, and why it mattered more than the difference in mass. We were comparing apples for apples. 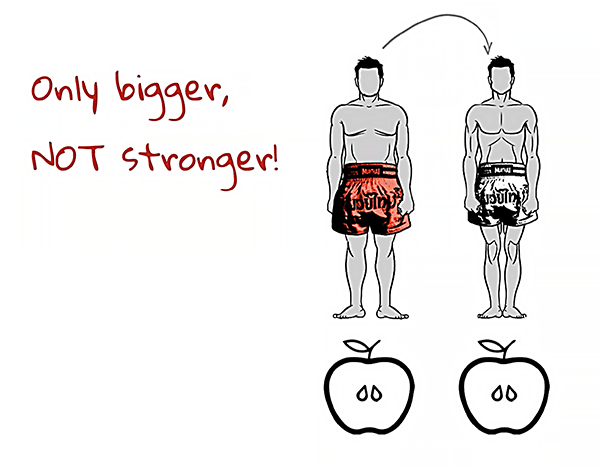 This time we consider what happens when we change two variables, both mass and force. This changes the game entirely! We’re comparing apples to oranges! 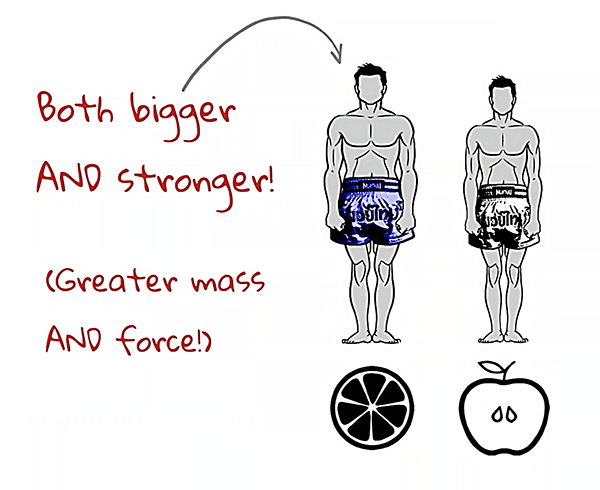 Bigger usually (but not always) means stronger. More muscle mass means a greater potential for force production or strength. That’s why we have weight categories, and male/female categories in combat sports. Relative strength to muscle mass is a separate topic, for now I’ll stick to bigger typically means stronger for this episode. 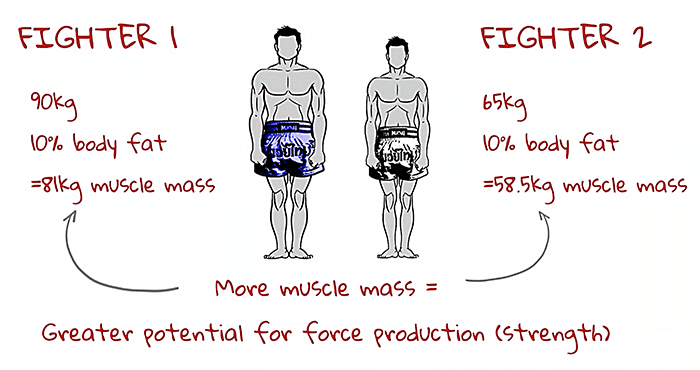 Remember that both mass and velocity were important, but that velocity was at least twice as important – or more precisely, exponentially more important!

If we rewind a little, to examine how both bigger and stronger affects velocity, then we can see why both size and strength matters, and why weight classes matter so much too! Newton’s 2nd law of motion (F = m x a) shows that if we not only increase mass, but also increase strength (or force), then acceleration increases. 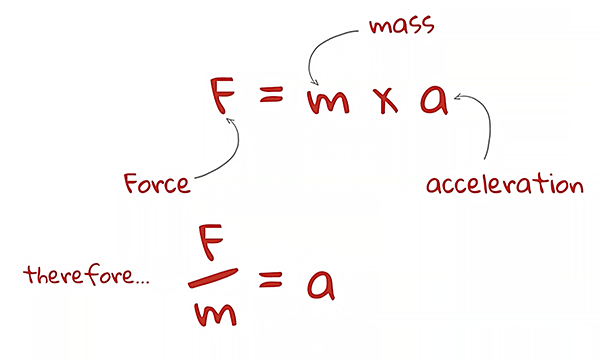 More acceleration creates higher velocity! So a heavier and stronger fighter has the potential to have both greater mass and velocity. Now the resulting kinetic energy jumps even higher, along with the striking energy too!

I chose kinetic energy to illustrate the destructive energy of a strike, and referenced penetration depth of arrows as a practical example, to help fighters feel what the real life effects of this applied physics really means to a fighter’s strike.

But another point correctly raised by Adam was how in physics, impulse is a more useful measure of striking effect than kinetic energy. And I 100% agree when we’re looking at the effect of an impact on variable targets that behave differently.

However, simplifying all this, and looking at the kinetic energy a fighter can produce and deliver to any target (regardless of how the target behaves) is cleaner. Especially when we’re comparing mass differences for a fighter before and after fat loss. And regardless, kinetic energy better describes the potential for the penetration of the strike, and the damage it causes to your opponent.

It’s literally the difference between your kick knocking your opponent down or breaking their ribs!

It’s going off topic a bit there, so I’ll save that discussion for another episode. But let me know if you want me to go into that, or if it’s just starting to get academic! What I really want is to provide you info that informs better fighter performance, not just argue semantics.

That said, increasing neuromuscular strength (without increasing muscle mass) should be the focus of a fighter’s strength training sessions. Or, if adding some muscle mass will help you personally as a fighter in your weight class, then adding muscle with a proportional increase in strength is critical to prevent you slowing up and losing striking power. And that’s the topic for the next video, “Why Bigger Isn’t Always Stronger”.