To become a faster, more explosive fighter you must first become stronger – produce more force. If you can create more force, you can accelerate quicker, hit at higher velocity and do more damage. That’s the mechanics, but we’re biological machines not purely mechanical ones.

If we want our strength to transfer into the greatest striking power and speed possible, we must understand how the human body responds to different types of resistance training and how this affects how fast we can move.

That way, we can target the right kind of training, get it in the right order, and make the most efficient use of your training time too.

In this episode we’ll dig into how training with different levels of resistance and movement speeds will affect how fast you can really be. In previous episodes I explained why being stronger provides the essential foundation for greater speed. Check out the links in the further resources at the bottom gf the page to better understand that…

However, it not only matters how much force you can produce (i.e. how strong you are), but how quickly you can produce that force too. To produce the greatest amount of force, you need enough time to get there…

It typically takes longer than 0.4 seconds to apply your maximum strength in an all out effort. But a punch for example, is thrown in less than half that time! You’ll never have time to put your full strength into a punch.

The difference between these two strength levels is the explosive-strength deficit. 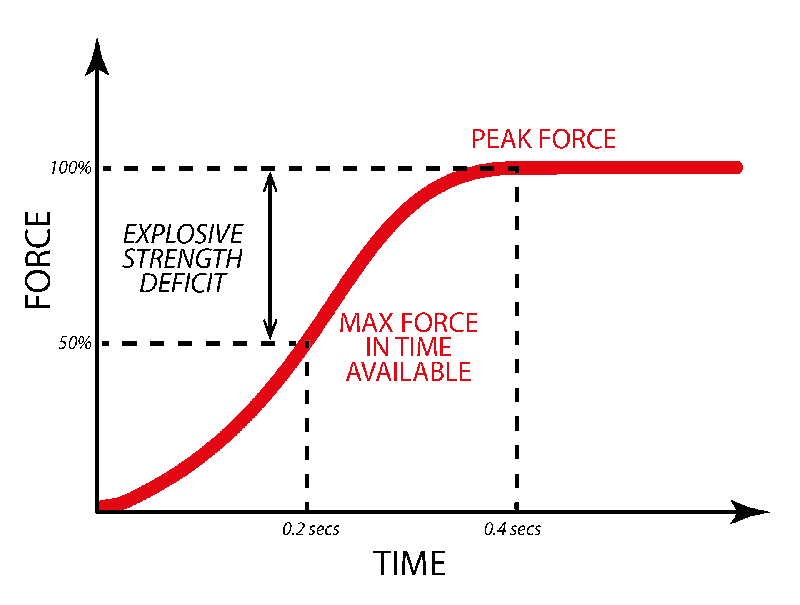 And it’s possible to train to increase how much force you can produce in a short time – that’s increase your rate of force development. In other words you can develop greater explosive strength, reducing the explosive-strength deficit, showing more of your strength in the typical time frames you’ll see as a fighter.

If we look at two fighters, one weaker but more explosive, and the other stronger but less explosive, we can see that when time is short (like when throwing a punch), this falls in a time deficit zone, and the weaker fighter appears to be stronger! But when time is longer (like in the clinch), this falls outside of the time deficit zone and the truly stronger fighter will apply all their force and show their strength. 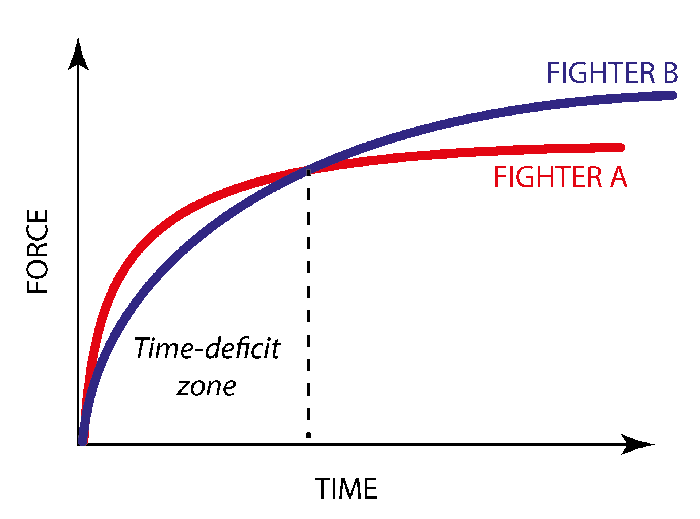 With a good strength and conditioning program, you can not only get much stronger but also specifically build greater explosive strength – which is far more important to striking athletes like Thai boxers.

It’s the difference between training like a powerlifter, focusing on heavy bilateral lifts like the deadlifts, squats and bench press, or training like a combat sports athlete which includes loaded jumps, olympic lifting variants, and plyometric work.

When we look at the changes to a fighter’s force-time curve during long-term athletic training, we’ll see that initially there’s an increase in explosive strength and maximum strength, but the time to complete a movement is unchanged. You can deliver more force but the speed is not obviously impacted.

As progressive training continues, not only is maximum strength increased further, but your rate of force development too. You gain much greater explosive strength and movement time is quicker too. Now you’re seeing a marked difference in your performance and forcing less explosive fighters to work in a time-deficit zone when fighting you, unable to match your strength in a short time frame. With further progressive training, explosive strength climbs even higher and your movement time becomes even quicker too. 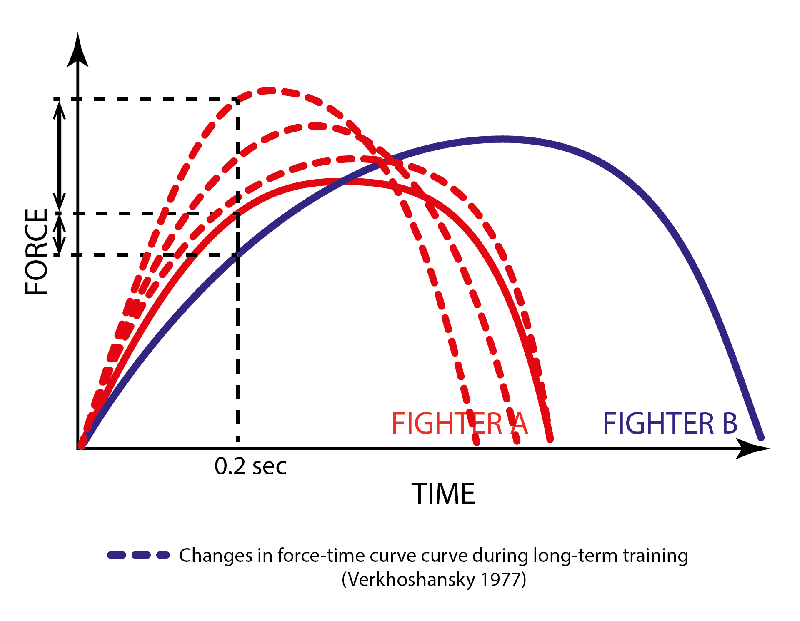 Everyone has a genetic starting point for any athletic quality and either a greater or smaller capacity to improve it. But with effective training, you can always improve it. Even outliers, the fighters that are explosive without a good training program, could be even more explosive if they trained to tap into their true potential. It’s biomechanics.

And a long-term investment in building athletic, explosive strength (power), leaves you with a performance foundation that enhances the technical skill you already have, and that other fighters will take a long time to catch up with.

If you want to learn more about these exercises and how to build them into your training program, there’s a link to another episode going into that in the further resources below. And you can download the Optimal Fight Camp Blueprint there too. Reach out if you have any questions, I’d love to help.