The evidence is in. Using a pre fight ritual boosts confidence and performance, fact!

Pre fight superstition and ritual are an inherent part of all combat sports, and are baked into the culture of Muay Thai.

But what are these fighters onto? And how can a seemingly irrational pre fight ritual boost confidence and competitive performance?

If you like the look of my X-Martial t-shirt in the video, you can get yours, and help fund this channel (we get an affiliate payment) by clicking here: https://www.xmartial.com/?ref=D0i7eQ6a

In this first episode, we’ll unpick the scientific validation of rituals in boosting competitive performance, and share why you should tap into this power and make it your own.

My personal philosophy is one of respecting the traditional and embracing the new. And this topic really lands right in the middle!

As a former pro Muay Thai fighter myself, I’ve immersed myself in the traditional side of Muay Thai. Not only wearing Pra Jiad armbands and Mongkon headgear while Sealing The Ring and performing a Wai Kru and Ram Muay dance before a fight, but also collecting various amulets, takrut, and charms, and getting a hand-poked sak yant tattoo for protection by a Ajarn Reusi while chanting prayers.

But as a rational, scientific, evidence based westerner, why?

Beyond respecting the traditions of the martial art that I practice, there’s also evidence that ritual enhances confidence in high pressure situations by around 10%. And regardless if you use traditional Thai rituals or superstitions, or create your own, it doesn’t matter. The effect is real.

And elite athletes inherently know this. In fact, the more elite an athlete becomes, the more likely they are to use superstitions. Over the course of their career they’ll adopt various pre competition rituals to help them boost their confidence and perform their best. Anything from wearing lucky underwear, to eating a certain pre game meal, all become part of the superstition for good luck and optimum performance.

But why do superstitions work?

Research shows that superstitious behaviour is more pronounced when uncertainty is higher, the importance of success is high, and a person perceives success is dependent on external factors, rather than under their own control.

The uncertainty and importance of success that we face as modern day fighters is a reflection of the peaked levels experienced in hand to hand combat two thousand years ago in the ancient Siam battlefields. And it’s why we still see these ritual practices in Muay Thai today.

When you fight an opponent that you either perceive as equally skilled or superior to you, uncertainty is higher. When you’re competing for a title, the importance of success is high. The influence of the referee, judges, and crowd (especially when fighting away from home against a local favourite) present external factors outside of your control.

All this creates anxiety and affects your temporary state of confidence, no matter who you are, or how experienced you are. Wrestling with uncertainty, in high stakes situations sees you reaching for things that bring good luck. To attempt to control the uncontrollable, skew probability in your favour and reduce psychological stress.

Fear is an emotion triggered when such high arousal situations are combined with a negative valence (something perceived as a bad thing). Like losing a fight, getting injured, or knocked out! 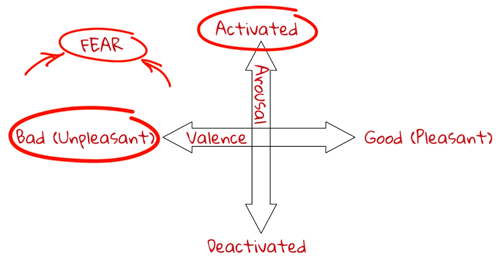 Emotions, like fear, are triggered incredibly quickly in the limbic system – your “emotional mind”. A part of the brain that functions differently from your slower, cognitive, neocortex or “rational mind”.

Your emotional mind is fast, but sloppy. Jumping to conclusions based on emotional memories (many formed in childhood that no longer hold true). Whereas, your rational mind is slower, more thorough, and can weigh up the pros and cons to reason a decision.

But when emotions are intense, the emotional mind dominates over the rational mind, making logical decision-making difficult.

But, superstitions and rituals make sense to your emotional mind, and it’s in charge when you’re highly stressed, not the rational mind. If the emotional mind believes you can control the uncontrollable by fostering good luck, you can shift from a negative valence to a positive one, improving your confidence.

It’s useful to consider the circumplex model of affect, which maps your emotions around two axes, unpleasant to pleasant valence, and deactivated to activated arousal. 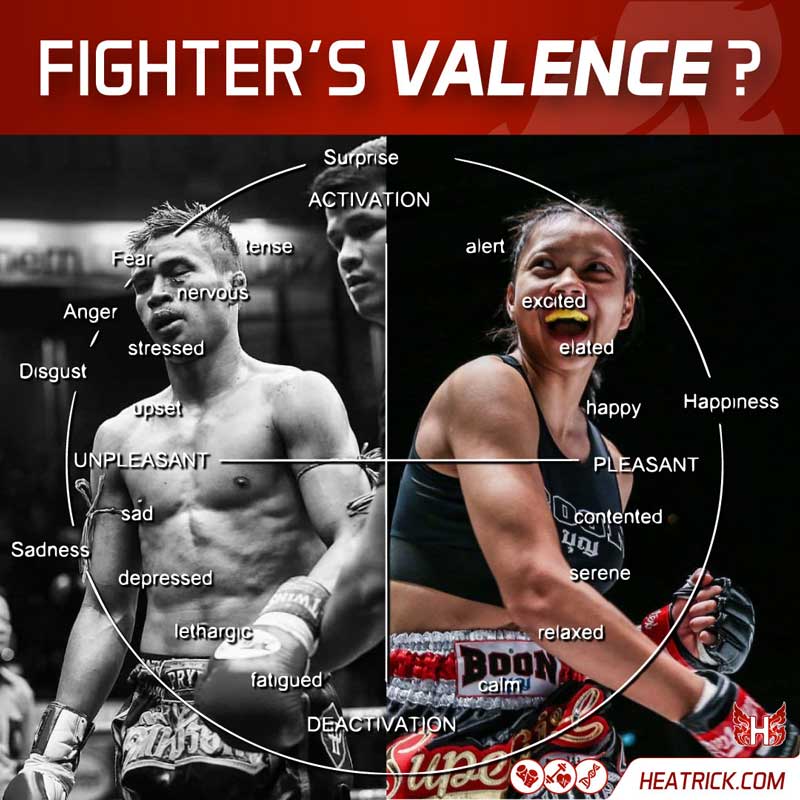 For fighters, this valence scale is at the sharp end of everything we do, but especially when fighting. Your personal positive or negative valence affects if you tip into either fear or excitement when you face your biggest challenges and your arousal is at its highest.

In a fight, this shows up as either tension that sabotages your performance, or alertness that enhances it! We can see how your own subjective neurophysiological (positive or negative) valence, along with your level of (central nervous system – CNS) arousal, gives rise to a spectrum of emotions that affect how you perform.

As well as affecting valence, rituals and superstitions also reduce psychological tension, calming down arousal levels. Which increasingly subdues the emotional mind, bringing your rational mind back into the game, along with all the benefits of reasoned thought.

In the next episode, I’ll look at the practical steps to gain control of fear, which types of ritual are the most effective, and how to use them to boost your confidence.