Some pre fight ritual practices boost confidence and performance, while others hamper it!

In this episode, we lever this understanding to pick the best rituals and personalise them, while avoiding those that could inadvertently sabotage you!

If you like the look of my X-Martial t-shirt in the video, you can get yours, and help fund this channel (we get an affiliate payment) by clicking here: https://www.xmartial.com/?ref=D0i7eQ6a

In a well matched fight, you’re going to feel anxiety. There’s no escaping it. In addition to the physical opponent, it’s simply part of the cocktail of emotions that any fighter must also contend with.

However, in reality anxiety is like the middle ground between fear or excitement. And with some emotional intelligence, we get to choose which side of the scale your emotions will tip.

Although you have the same neural activity, there’s a different cognitive appraisal. Either a positive or a negative valence, you frame it as either good or bad.

Former Navy SEAL Officer, Rich Diviney, describes both fear and excitement as anxiety either with or without uncertainty. And I find this an incredibly practical framework.

Fear is anxiety PLUS uncertainty, which shifts you into a negative valence or attitude.

Excitement is anxiety WITHOUT uncertainty, which shifts you into a positive valence. 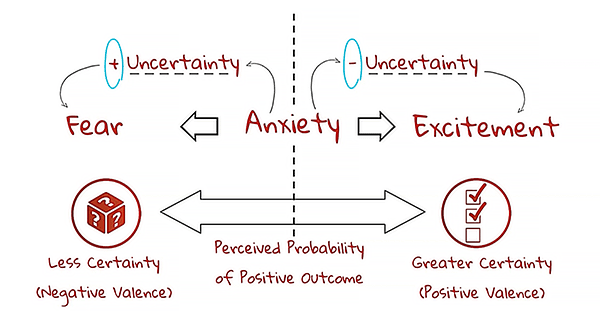 Even in the most highly aroused, highest pressure situations, greater certainty – that’s a perceived higher probability of a positive outcome (good luck or “chok dee”) – can be offered to the dominant “emotional mind” through the use of rituals or superstitions.

In truth, during times of high stress, taking any neutral or positive action will increase your sense of certainty. Just avoid taking an action that makes the situation worse!

Talking to the emotional mind in its associative, metaphorical language, is an action step toward increasing certainty, and a positive shift from fear to excitement, away from tension and toward alertness as arousal calms down.

As arousal subsides to an appropriate level, the rational brain begins to dominate and further creative opportunities present themselves, along with more positive steps that increase certainty. The ritual talks you down from the ledge.

There are several categories of superstitious rituals that you can employ as a fighter, all with varying levels of effectiveness, some even negatively affecting confidence! These ritual categories range from clothing or appearance, lucky items or charms, pre fight activities, fight time activities, prayers, team support, and coach’s rituals.

We’ll start by clarifying what each category is:

Fight time rituals include scoring first, hiking up shorts, bouncing on the balls of the feet, sipping water or stretching between rounds, etc.

Team support rituals include pep talks, not to be confused with tactical corner advice between rounds.

Coach rituals include the coach offering a prayer for success over the fighter’s head, or taking a lucky charm too, etc.

All these rituals can stack to help boost your confidence, but those that have the biggest impact aren’t necessarily the most used!

According to the model of sports confidence, superstitious rituals account for a 10% increase in confidence. I’d hazard a guess this improvement serves to rescue confidence when arousal is at its highest, and the emotional mind has its tightest grip.

Coaches should be cautious of removing and replacing a fighter’s superstitions, especially when it comes to lucky charms, due to their positive relationship with confidence.

And it’s worth pointing out that team rituals can also negatively affect confidence if fighters feel unprepared if they don’t get a pep talk, fist bumps, team cheers and such.

Coaches and teammates should consider how their actions may form part of a fighters ritual that’s outside of the fighters control. And as such, could inadvertently be missed, sabotaging a fighter’s confidence.

Remember, fighters build this personal repertoire of superstitions as they gain experience. And as long as they believe the superstition is effective in increasing their confidence, and ultimately their performance, the results can have astonishing effects.

And outside of focusing on lucky charms, I have two final ritual tips.

Firstly, check out the episode on Tips For Coping With Pre Fight Nerves. There you’ll find a great framework for handling the pre fight stage, including some self-talk and breathing rituals.

Secondly, research has shown there is a simple method that shifts performance anxiety into excitement, and it can plug into any of the ritual categories. When you feel anxiety revving up, repeat to yourself three times, “I’m excited.” That’s it! 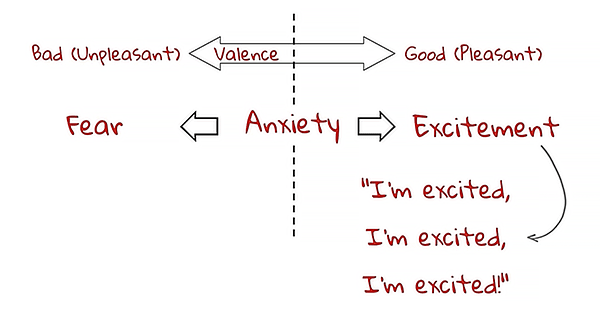 Now it’s your responsibility as an athlete to find which rituals serve you best, and which don’t.

And if you want some support in your “irrational” superstitious rituals from your coaches and teammates, share these two episodes with them. And encourage them to tap into their own rituals too!